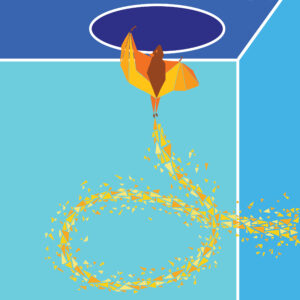 Stability in the air — visualizing neural activity during aerial flight reveals spatial neural codes. Illustration by Madeleine Snyder, a co-author on the study.

Bats, the only flying mammals on the planet, are a rather unique animal model in the world of neuroscience, but scientists at UC Berkeley have now discovered that the remarkable precision of their flight may hold the key to answering a long-standing question in neuroscience.

For nearly half a century, neuroscientists have wondered whether the neural code that represents space in the brain is stable, or if it changes over time. A new study from Michael Yartsev’s NeuroBat lab shows that the neural code is highly stable in bats for days, and even weeks, as long as variations in spatial behavior are properly taken into account. This finding challenges the widely-held view that the spatial code drifts over time, which grew exclusively out of research in laboratory mice. Bats’ highly stereotyped flight paths allowed Yartsev’s team to control for variations in movement, which, combined with novel technology to observe neural activity in flying bats, revealed the fundamental stability of the brain’s positional neural code.

The study, published in Nature in April 2022, was led by Berkeley Neuroscience PhD alum Tobias Schmid and postdoctoral fellow William Liberti. They examined neurons in the hippocampus, an area of the brain important for learning and memory and also a key site for major memory disorders, such as Alzheimer’s disease. Neurons in the hippocampus called place cells fire when an animal is at a particular point in space, such as when a rodent is at a certain location within a maze. A place cell’s characteristic activity at a given point in space is called its spatial tuning.

According to Yartsev, who is a member of the Helen Wills Neuroscience Institute and an assistant professor of bioengineering and the Berkeley Nanosciences and Nanoengineering Institute, when place cells were discovered around 50 years ago, it was intuitively believed that their spatial tuning was likely to be stable given that our memories of locations, such as our homes, are rather stable. This is also important clinically when memory problems related to the hippocampus arise — such as during Alzheimer’s disease where this structure gets damaged and subsequently, stable memories begin to vanish. However, this hypothesis could not be adequately tested because the activity of individual neurons could not be observed day after day using electrodes — the main technique available to study activity in place cells at the time.

But recent advances in genetic and imaging techniques have gotten around this problem. Neuroscientists can now use genetically-introduced calcium indicators to observe activity in individual place cells, repeatedly, over extended periods of time. When a neuron fires an action potential, calcium floods into the cell, causing the calcium indicator to fluoresce. These flashes of light indicating neural activity can then be detected with a microscope. Over the last decade, results from studies using calcium imaging in mice have suggested that the spatial code is actually unstable and drifts over time.

“[This] doesn’t really make sense with how we sort of instinctively think about the brain, which is there’s some stability there, if we have memory,” Schmid says of these studies. “They have these mice running back and forth on the same track — presumably they’re doing the same thing. Why is the brain doing different things every day?”

Yartsev’s team decided to investigate this question in Egyptian fruit bats, whose flight paths within a familiar location are extremely precise and consistent. “The bats’ behavior is sort of the magic of it,” Schmid says. “We were able to leverage that and say, okay, if the behavior is exactly the same from day to day, what does the brain do?”

To detect neural activity, Schmid used a modified virus to introduce a calcium indicator into neurons in the hippocampus of bats, which is the first time such genetic tools have been used in the brain of any freely flying animal. Liberti, who had developed a miniature head-mounted microscope, adapted it to work wirelessly in flying bats so that the team could monitor neural activity as the bats navigated through space.

“The success of this project was [due to] an ideal combination of the technology Will developed and Tobias’ skills in getting really complicated things working. Between the two of them, they were able to really advance it — to image [neural activity] for the first time in a flying animal and address a really fundamental question in the field,” Yartsev said.

The researchers allowed the bats to fly freely in a room outfitted with high-speed cameras that precisely tracked their movements. Once the bats crossed an invisible boundary, two feeding stations on one side of the room would dispense a tasty treat of pureed fruit. The stations would then deactivate, and the bats would have to fly back past the boundary again to trigger another squirt of fruit, allowing the scientists to track 50 to 100 flights a day. They found that each bat developed their own unique repertoire of a few different flight paths, and each path had very little variation. “They’ll fly those same trajectories, again and again and again. It gives us a lot of statistical power for analysis,” Liberti says.

The team monitored the activity of dozens of neurons in the hippocampus of each bat as they were flying, and found that the spatial tuning of most neurons was highly stable over days and weeks when the flight pattern was taken into account. Changes in neural activity could be explained by variations — even minor ones — in the flight pattern, as opposed to actual changes in tuning.

“What our study shows is that potentially, these small variations in movement are actually really important,” Liberti says. He says this may explain why the spatial code appeared to be unstable in previous studies. “Maybe there [were] unaccounted for changes in behavior that [were] driving what they think is a change in tuning of cells, but the underlying tuning might actually still be the same.” While testing this prediction is ultimately up to the researchers working with mice, what this study shows is that the notion of an unstable code underlying long-term positional coding is most certainly not the case across mammals and importantly, that when studying the brain it is extremely important to carefully monitor for behavioral variation.

The researchers say that this finding, which provides insight into spatial memory, also raises many new questions about how the brain changes during learning — which is frequently studied in the hippocampus. Yartsev says that learning is the “biggest open question remaining here”, and something he would like to pursue next. When the bats were first introduced to the room, they learned how to move within it and constantly changed their trajectories. “We specifically did not look at that — we looked at what’s happening during stable behavior,” Yartsev says. “When behavior is stable, the code is stable, but what’s happening during learning?”

Liberti adds that these findings could have broad implications for neuroscientists who study learning. “Imagine if a lot of the plasticity and changes in tuning we think are happening during learning are actually just reflecting your changes in behavior as you’re learning. This could be a huge confound to a lot of these studies,” he says. “It’s a big frontier for us, certainly, and I think it’s going to be something that the field is going to start to think about soon.”

The study also could have implications for the many other areas of the brain that appear to have a drifting code, such as the motor cortex and auditory cortex, according to Liberti. “Most of the time when these observations are made, [the researchers] are not necessarily controlling for behavior very well, and we know that what the animal is doing is a huge driver of variance for neural activity,” he says. Yartsev adds that their findings are “the tip of the iceberg for many other questions.”

Bats’ rigid flight paths were the key to uncovering the stability of the spatial code, which Yartsev says underscores the importance of matching the appropriate animal model to the research question, particularly for behavioral research. “This is quite different from how the vast majority of neuroscience is thinking nowadays,” he says. “I’m hoping that this result will serve as an example for people that it’s really important to consider the animal as it relates to your question.”