The White House BRAIN (Brain Research through Advancing Innovative Neurotechnologies) Initiative is a bold call-to-action focused on revolutionizing our understanding of the human brain. Neurotechnology Industry Day, presented by the Tri-Institutional Partnership (TrIP) between UC Berkeley, UCSF, and LBNL, brought together Bay Area researchers and industry partners to generate transformative collaborations in response to this call to action. The event focused on the development of enabling technologies for neuroscience instrumentation, computation, and medical devices. 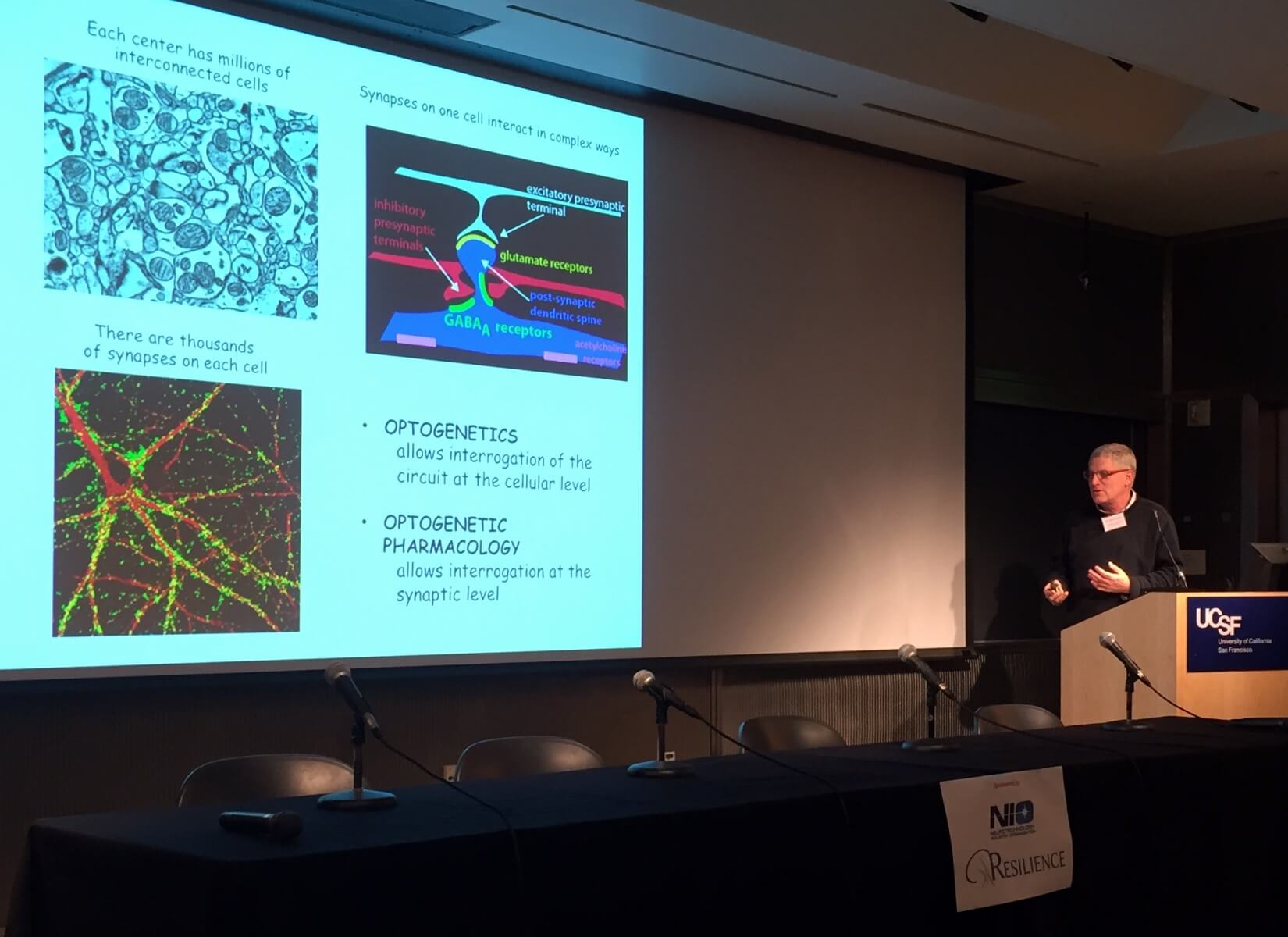 Industry Day showcased the progress that has been made in the six high risk/high reward projects that were funded by BRAINseed last year. BRAINseed awards were given to ambitious multidisciplinary projects with research teams spanning the three TrIP institutions. During his talk, BRAINseed awardee Bruce Cohen said, “It is great when a program like this comes along and forces us to learn each others language and motivations.” Cohen’s project with Chris Chang, Charly Craik, Robert Edwards, and Ehud Isacoff aims to control specific neurons in deeper brain regions using nanocrystals that can convert the deeply penetrating near infrared light to wavelengths that can activate optochemical and optogenetic tools. Their project has since received additional funding from CalBRAIN. Several of the awardees mentioned that their projects have gone on to get larger grants thanks to BRAINseed funding.

A highlight of the day was the industry panel discussion focused on emerging technologies that are ripe for translation and how to transition from the lab to commercial development. “We are in a very interesting time because technology and knowledge about how the brain operates in health and disease is advancing rapidly and translation is far behind,” said Edward Chang, Associate Professor of Neurological Surgery and Physiology at UCSF and Co-Director of the Center for Neural Engineering and Prostheses.

Chang specifically mentioned that industry is using decades old deep brain stimulation technology, and bridging the knowledge gap could mean improved therapies. Juan-Pablo Mas, Partner at Action Potential Venture Capital/GlaxoSmithKline, agreed, saying that in the last five years there has been a big increase in funding and interest for neuronal stimulation devices and neuromodulation as first-line therapy. Karin Immergluck, Head of the Oﬃce of Technology Management at UCSF, said that there is also increased interest in app-based behavioral modification and neurogaming.

Christopher McKee, Vice Chancellor for Research at UC Berkeley and Professor Emeritus of Astronomy, closed out the event by drawing an analogy between what is going on in the Bay Area and star formation. “Stars form from very diffuse gas under the influence of gravity, which brings the gas together, heats it, and eventually ignites nuclear reactions, ” McKee said. “The BayBrain initiative is like that in bringing people together, generating new ideas, and forming something entirely new and really stellar.”

Industry Day was sponsored by Resilience Therapeutics, Neurotechnology Industry Organization, and the Helen Wills Neuroscience Institute. You can view the full agenda below.

Read more about the research being done by the BRAINseed awardees:

A glimpse of the future with BayBRAIN
Cognito | November 11, 2015 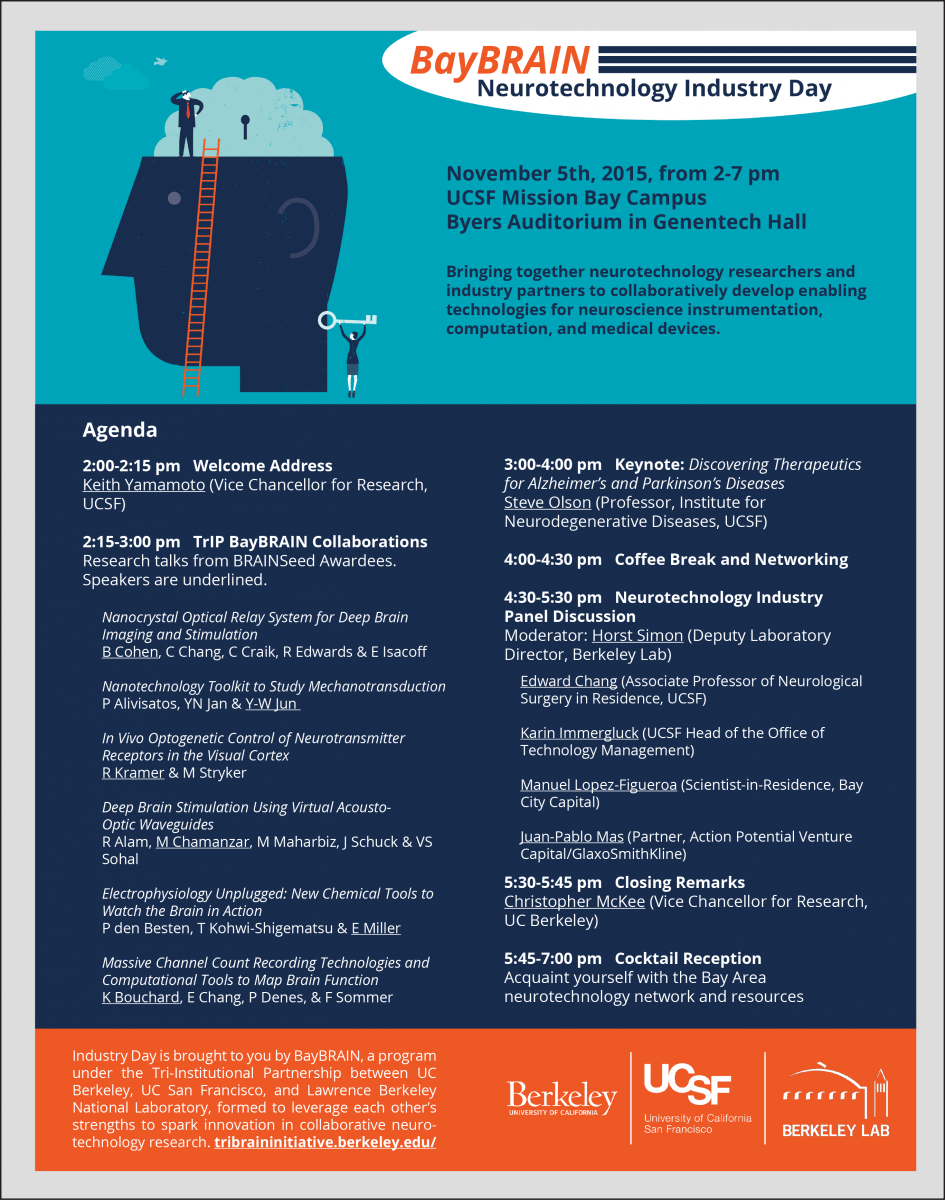