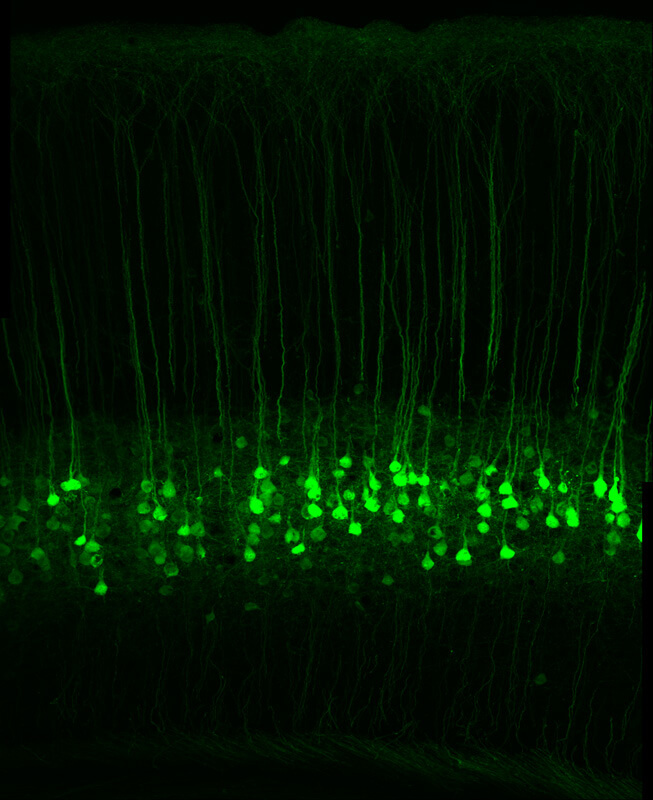 The Federal Brain Research through Advancing Innovative Neurotechnologies (BRAIN) Initiative is an unprecedented commitment of government and private funds to support multidisciplinary neuroscience research, with a proposed budget of $4.5 billion over 12 years. Announced in April 2013, the BRAIN Initiative has been successful in catalyzing new collaborations and funding hundreds of researchers who are tackling the big questions and technological challenges in neuroscience.  The BRAIN Initiative promises to enable breakthroughs in our understanding of how the brain works and in our generation of better tools to prevent, diagnose, and treat the debilitating diseases of the brain.

Olfactory Navigation: Dynamic Computing in the Natural Environment
Lucia Jacobs is part of an interdisciplinary team of researchers awarded $6.4M from the National Science Foundation (NSF) for their project aimed at cracking the olfactory code. They will investigate how a diverse set of animals use their sense of smell to orient in space toward an odor. Animal behavior and neuronal activity will be measured and controlled in both real and virtual environments with a known spatial odor plume. The amassed data will be used to generate computational models of odor-based navigation that can be used to build engineered devices, such as robotic sniffer dogs.

Going All Wireless to Establish Bats as The First Mammalian Model System for Vocal Learning
Michael Yartsev was awarded a $300,000 NSF Early Concept Grants for Exploratory Research (EAGER) for his ambitious plan to establish bats as a mammalian model system to study vocal learning. Vocal learning ability is the foundation of human language, but there are no existing mammalian models to study the neural circuits underlying this process. Bats are one of only a few mammals that learn their vocalization, much like humans learn their language. Standard mammalian model systems such as rodents are born with an innate set of vocalizations. Yartsev will develop methods to measure and manipulate neuronal activity in freely behaving bats to decipher the neural basis of vocal learning.

Novel Tools for Cell-Specific Imaging of Functional Connectivity and Circuit Operations
Ehud Isacoff, Kristin Scott, and Hillel Adesnik were awarded $2M from the National Institutes of Health (NIH) U01 to create and validate novel tools to measure neuronal activity, connectivity, and synaptic strength in defined neuron types. Rather than relying on cell-type specific genetic promoters, Isacoff and colleagues plan to use light to turn on fluorescent reporters of activity in the desired neuron or group of neurons. This “turn-on” approach can be adapted to work with calcium, voltage, and glutamate indicators, as well as reporters of synaptic transmission. New tools will be validated for in vivo applications in brain circuit analysis and behavior in three model organisms: zebrafish, fruitfly and mouse.

Berkeley Course on Mining and Modeling of Neuroscience Data
Fritz Sommer and Bruno Olshausen were awarded $315,000 from NIH to administer and further develop their successfully established two-week summer course on computational neuroscience. The course teaches methods for analyzing neurophysiology data, typically measurements of neural activity over time, co-registered with behavior or stimuli. The course is designed to fill in a significant gap in training opportunities in the intersection between neuroscience and computational methods (computer science, mathematics, statistics, physics, engineering). To recruit students from Computer Science and Mathematics the project is partnered with the Simons Institute of the Theory of Computing and the Mathematical Sciences Research Institute.

Cal-BRAIN and The Berkeley BRAIN Initiative

The Federal BRAIN Initiative has inspired both California and UC Berkeley to start their own related initiatives. Cal-BRAIN (the California Blueprint for Research to Advance Innovations in Neuroscience) awarded funding to 16 groups with a goal of identifying new technologies that enable researchers to monitor brain activity with greater specificity, depth, and spatial extent than was previously possible.

Nano-optogenetic control of neuronal firing with targeted nanocrystals
Bruce Cohen and Ehud Isacoff were awarded $120,000 for their proposal to use near infrared (NIR) light for optogenetic manipulation of neuronal activity. NIR light can penetrate deeper into the brain than visible or ultraviolet light typically used for optogenetics, giving it the potential to noninvasively excite or inhibit neuronal activity in deeper brain regions. However, NIR does not work with existing optogenetic tools. Cohen plans to develop nanocrystals that convert NIR light to wavelengths that can activate specific neurons directly.