The Brain Imaging Center: A campus resource for cutting-edge research 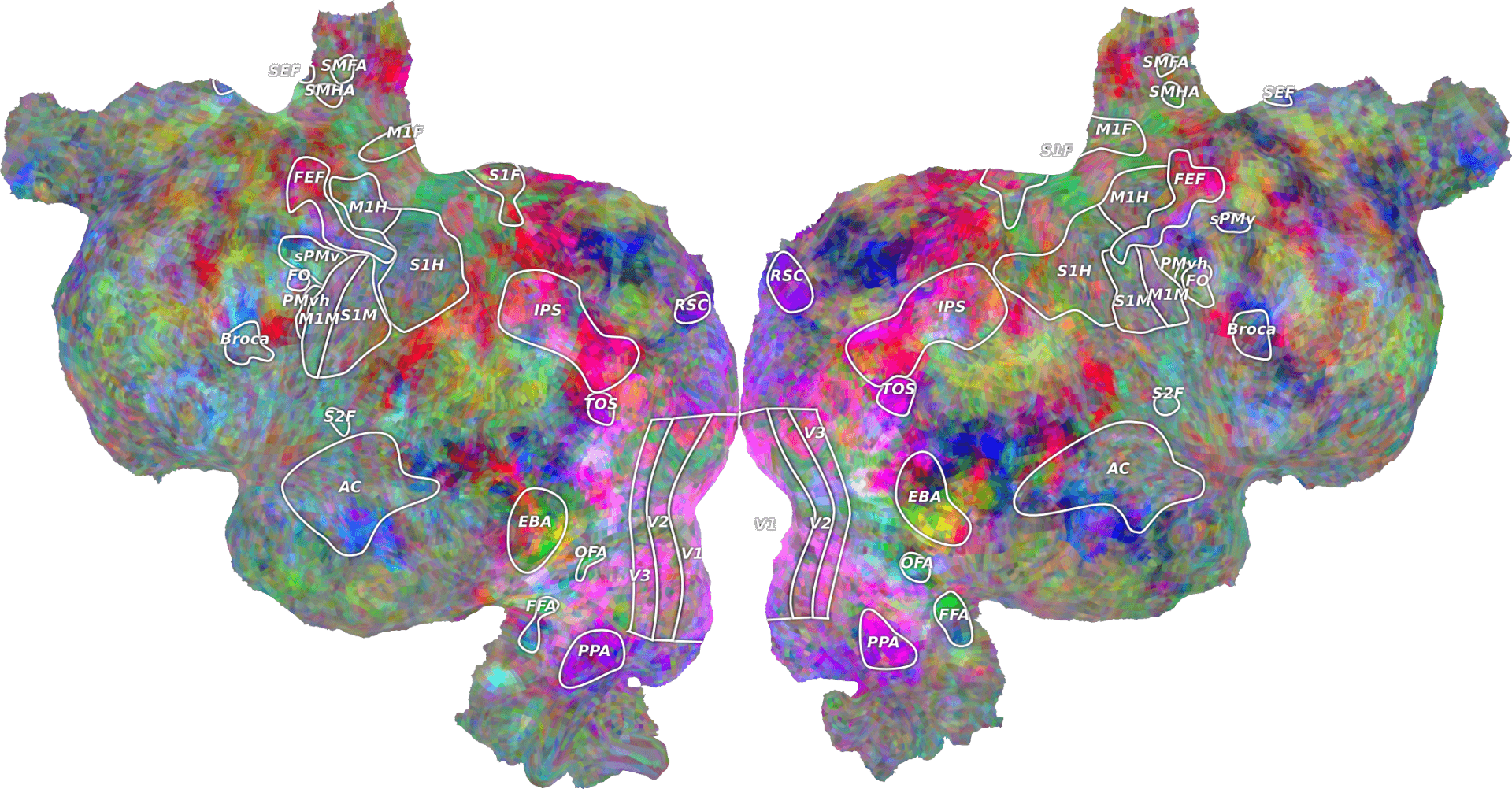 A flattened representation of the human brain imaged at the BIC. Colors correspond to the brain’s activation in response to certain words or images. Image courtesy of Alex Huth, Gallant Lab.

The Henry J. Wheeler Jr. Brain Imaging Center (affectionately referred to as ‘the BIC’) is a hub for cutting-edge neuroscience research at Berkeley. The BIC community is a diverse one, with its users calling departments across campus their home. In neuroscience, psychology, vision science, anthropology, bioengineering, and even the Haas School of Business, neuroimagers are providing a deeper understanding of the machinery of thought.

Jack Gallant and his team, for instance, use MRI to scan people’s brains as they view movies. They then reconstruct the images people saw based on the patterns of brain activity alone.

Matt Walker’s lab demonstrated the importance of good sleep for the functioning of brain regions involved in decision-making. Sleep-deprived participants relied less on these regions and consequently made poorer decisions about which foods to eat. The results highlighted a potential link between sleep and obesity.

Silvia Bunge and her team were among the first to use diffusion tensor imaging (DTI) at the BIC, a technique which tracks how water spreads inside the brain tissue. They succeeded in identifying pathways in the brain strengthened after LSAT prep courses.

The list of discoveries made at the BIC goes on.

The Brain Imaging Center is hardly limited to Berkeley labs, however. “It goes way beyond neuroscience,” says BIC director Mark D’Esposito. “It’s a service available to everyone.”

For all of the Berkeley labs that use the BIC, it is somewhat less well known that many clinical groups outside of Berkeley have chosen the center as a home for their research. For example, the healthcare giant Kaiser Permanente partnered with the BIC to study the causes of heart attack and stroke. The Veterans’ Administration has used the BIC to image traumatic brain injury (TBI) and post-traumatic stress disorder (PTSD) in war veterans. Scientists from the Gallo Clinic and Research Center at UCSF came to the BIC to study the genetic factors contributing to addiction.

Many of the success stories reflect a track record of pioneering new techniques. David Feinberg, for example, a physicist at the BIC, is developing multiband pulse sequences which may allow brain activity to be tracked up to seven times faster than is currently possible.

Some scientific questions are best answered by using multiple tools during a single scan session, and the BIC is well equipped for this. Simultaneous electroencephalography (EEG) and functional magnetic resonance imaging (fMRI) can track brain activity closely over both time and space, without the trade-offs of using either method alone. Transcranial magnetic stimulation (TMS) can now be administered during fMRI scans, selectively (and, importantly, reversibly) disabling brain regions to investigate their function.

The BIC is also ground zero for developments in ultra-low field MRI – a new way of scanning which uses a fraction of the magnetic field strength and also a fraction of the cost. The weak field is better in imaging certain tissue types, which may help doctors cheaply determine whether a stroke patient needs emergency surgery, monitor the progression of diseases like Alzheimer’s and Parkinson’s, and target therapy for tumors. 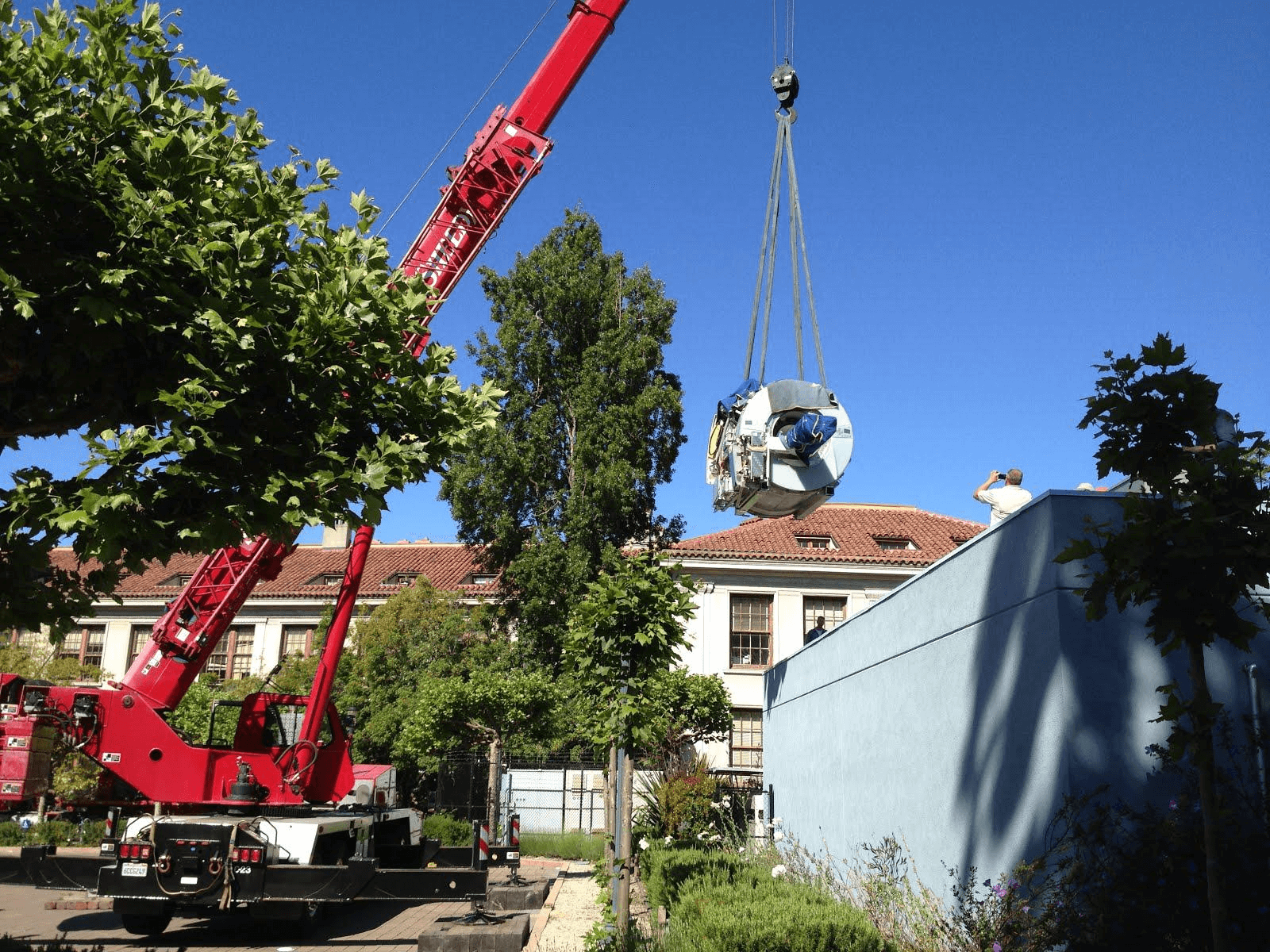 In 2013, the BIC relocated to a new, state-of-the-art facility in the Li Ka Shing Center for Biomedical and Health Sciences. The move was a spectacle, with camera-wielding scientists gawking as their workhorse, the 3 Tesla scanner, flew through the air suspended by a crane. It was not a sight they were likely to see again, as the new facility was designed with growth in mind.

Careful design of the space means acquisitions can be driven by the needs of the community rather than the constraints of the building. “Who knows what the next technology is going to be,” says BIC director Mark D’Esposito.

In the meantime, researchers are excited about the move. “I love the new facility – having extra space for equipment and preparation really makes the difference,” says Natalia Bilenko, a graduate student in Jack Gallant’s lab.

First of its kind

Li Ka Shing Center is a huge step up from the BIC’s previous humble home. Fifteen years ago, D’Esposito was facing the prospect of establishing the first brain imaging center to ever exist outside of a medical school. In medical settings, the experimental design bent to fit clinical procedures. D’Esposito wanted researchers at the BIC to have greater flexibility and control, tailoring their scans to better answer the questions at hand.

There was just one problem: no building on campus could be retrofitted to accommodate the scanner. Undaunted, D’Esposito opted to house the BIC in a modular building in the Wellman Courtyard on UC Berkeley campus. A second temporary building was added in 2008 for the then-new 3 Tesla scanner, prompting users to dub the complex “the trailer park.”

Beyond their charm, however, the cozy quarters did have some benefits, says Ben Inglis, the BIC facility manager: “The constraints forced us to be quite imaginative and many of our better solutions are principles we’ve adopted in spite of our new, larger digs.” One step inside the new control room shows what he means: never has there been a more neatly organized nest of cords and cables.

A culture of self-reliance

Crafty feng shui isn’t the only principle that has carried over to the new facility. The BIC research culture bears signature of its ad hoc origins at the “trailer park” – users are expected to take responsibility for educating themselves about the complicated world of neuroimaging.

To that end, the Center offers its own brand of “continuing MRI education,” encouraging users to learn as much as they can from its resident experts. BIC scientists Matthew Brett and JB Poline recently led a Practical Neuroimaging course, where BIC users learned the ins and outs of working with their data.

Adding to these efforts, Inglis started a blog about the neuroimaging. PractiCal fMRI aims to provide a wider audience of MRI researchers with tips and tricks to help them conduct better fMRI experiments. The motto of the blog is “Sure, you can try to fix it during data processing, but you’re usually better off fixing the acquisition!”

“We may be physically located in Berkeley but we try to approach neuroimaging with a global perspective,” Inglis says. 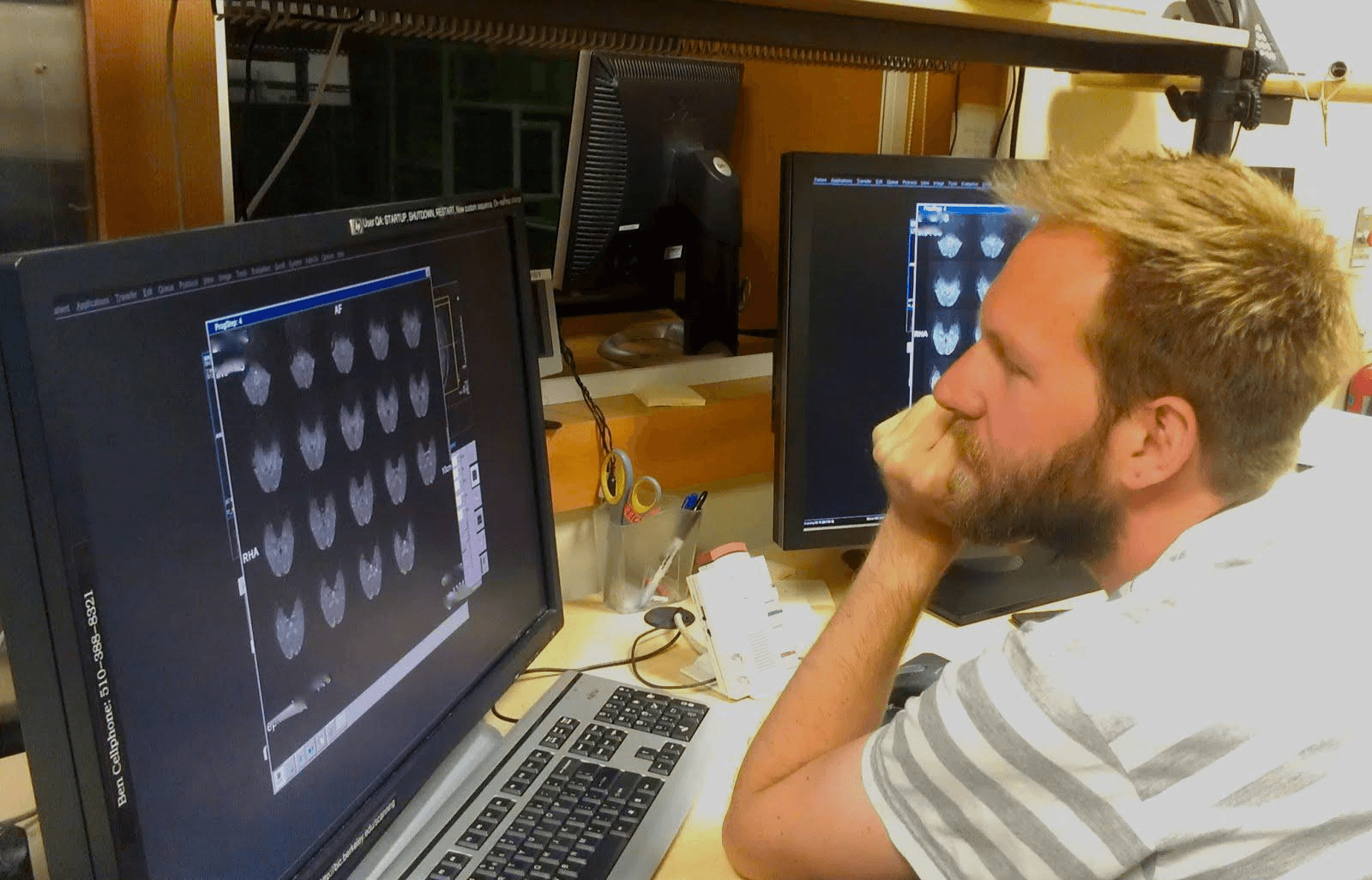 Shawn Marks, a graduate student in the Jagust lab, inspects his fMRI data collected in the BIC.

Researchers are expected to understand what they are doing, but they do not have to go it alone when it comes to customizing their experiments. “The BIC has staff dedicated to helping you make your experiment work,” says Inglis.

BIC staff members often help researchers break free from out-of-the-box solutions on which many institutions rely. BIC engineer Rick Redfern works to translate ideas into realities. “There are very few facilities with our capabilities and expertise,” says Redfern. “Ninety-nine percent of them must use outside sources to get their ideas fabricated. I simply go in my shop and build whatever is required.”

Having BIC scientist Fernando Perez just down the hall is another asset. Perez created the iPython notebook, an award-winning computing environment for researchers who want to combine all of their notes and data in a single place.

Scientists at Henry J. Wheeler Jr. Brain Imaging Center enjoy both great freedom and great responsibility. True to their humble roots, they rely on themselves and their community, but also on the unrivaled resources at their fingertips to find solutions to big problems in neuroscience. The BIC has provided a home for groundbreaking research for fifteen years, and is well-prepared to adapt as the field of neuroimaging evolves.