Despite dramatic differences in shape, these direction-sensing retinal neurons have similar synaptic organization

By Natalie TerranovaSeptember 9, 2021No Comments 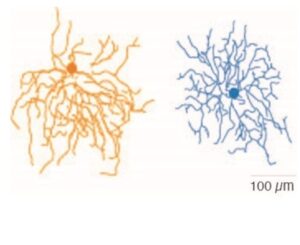 Neurons receive signals through synapses on their dendrites, and the precise organization of excitatory and inhibitory inputs helps determine a neuron’s response, and ultimately, its function. A new study from Marla Feller’s lab examines how the shape of dendritic trees influences the pattern of excitatory and inhibitory inputs onto retinal neurons that detect movement in a particular direction (direction selective retinal ganglion cells; DSGCs). These inputs are critical for enabling DSGCs to encode direction of movement.

The study, which was published on August 11 in eNeuro, was led by Berkeley Neuroscience PhD alum Malak El-Quessny when she was a graduate student in the Feller lab. El-Quessny and Feller examined excitatory and inhibitory inputs onto two types of DSGCs in mice: one with asymmetrically-oriented dendrites, and the other with symmetrical dendrites. They found that despite having very different shapes, these two types of neurons had similar organization of their excitatory and inhibitory inputs. This research provides greater insight into the relationship — or lack thereof — between shape and synaptic organization in these cells, and how direction of movement is computed by retinal neurons.