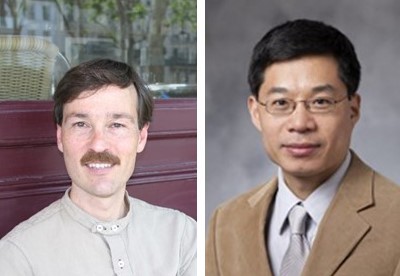 We are pleased to announce that Jack Gallant, professor of psychology, and Chunlei Liu, associate professor of electrical engineering and computer sciences, will serve as the new co-directors of the Berkeley Brain Imaging Center (BIC). The BIC is a campus-wide resource that supports advanced brain imaging technologies, such as MRI, dedicated to basic and clinical brain research. We would like to thank Mark D’Esposito, former director of the BIC and professor of psychology, for helping to build and lead the BIC into a tremendously valuable resource for Berkeley Neuroscience and researchers across a variety of disciplines.

To learn more, read the message below from our director, Ehud Isacoff, to the Berkeley Neuroscience community.

After many years of incredible effort to help build and then run our Berkeley Brain Imaging Center (BIC), Mark D’Esposito has announced that he is stepping down. We want to thank Mark for all he has done for the Berkeley Neuroscience and MRI communities. Under Mark the BIC brought together neuroscientists, cognitive psychologists, theorists, MDs, basic scientists and engineers and radiated out neuroscience to the entire Berkeley community all the way to the schools for Art, Public Health, Optometry and Business. Mark also brought in a large number of collaborators from other institutions. The BIC has been a powerful component of Berkeley Neuroscience.

To ensure a smooth transition, I am pleased to announce that, following recommendations from the broad MRI user community, Jack Gallant and Chunlei Liu have agreed to take over as the new BIC co-directors, effective immediately. The BIC Advisory Committee (Rich Ivry, Anne Collins, Bill Jagust and Marla Feller, with ex officio members, HWNI Executive Director Barbara Peterson and VCRO financial analyst Brenda Naputi) will help Jack and Chunlei to structure BIC services to best meet the needs of the MRI community.

As you know, Jack is a neuroscientist who has pioneered computational advances for MRI analysis of brain function and Chunlei is an MRI engineer who has been pushing the limits of resolution for structural and functional MRI, including the exciting NexGen 7T project led by David Feinberg, the newest component of the BIC. Under Jack and Chunlei we look forward to upgrading the Siemens 3T, moving toward greater integration of the GE 3T, and developing the NexGen 7T to a point that it can push forward the work of the entire community. I am confident that the combination of these two neuroscientists, who are developing some of the most advanced methods for MRI, will usher in a strong next new era for neuroscience at Berkeley.