Insatiable Insects: Identification of four neurons that act as feeding switches in the brain

It is possible to eat until your stomach bursts open, but most people will never come close to this horror. Feeling like your stomach might burst, for example after gorging on a large Thanksgiving feast, is the painful signal that tells you to stop eating and saves you from a worse fate. The neuronal circuits that control our eating behavior have evolved to keep us well fed, but not overfed. There are triggers that tell you to start eating, such as hunger and the availability of food, and triggers that tell you to stop, such as sensation of dangerous foods or gut distension.

But what if that system was broken? Kristin Scott’s lab at UC Berkeley has discovered a small set of neurons in the fruit fly that chronically inhibit eating. Without them, the animal will eat until it regurgitates, excretes, or explodes. 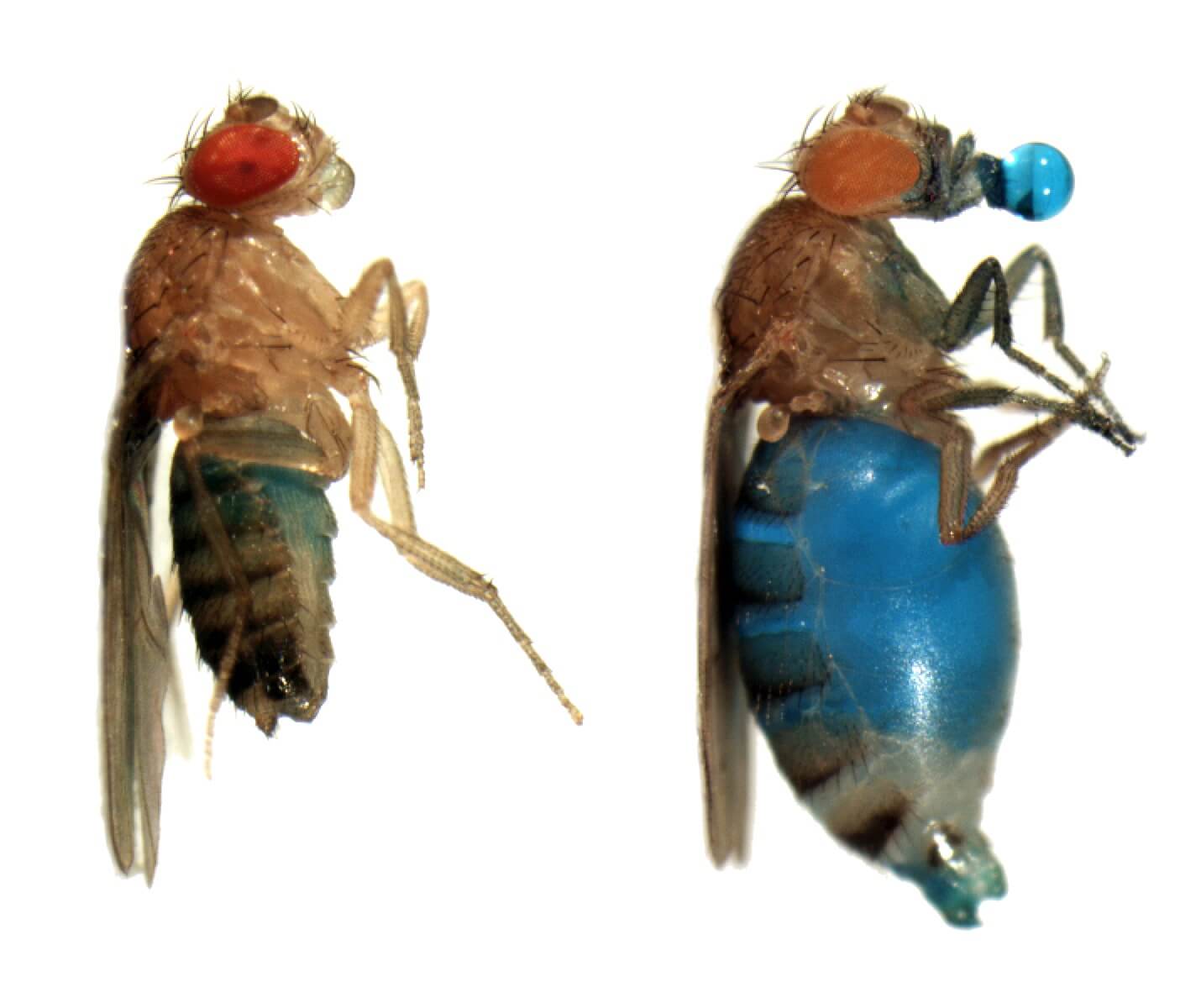 Allan-Hermann Pool, first author of the paper Four GABAergic interneurons impose feeding restraint in Drosophila, published in Neuron today, said he was motivated to study feeding circuitry because he likes “the notion that there is some sort of switchboard in the brain that drives emotions and behaviors.” His efforts paid off. Out of the 100,000 neurons in the fruit fly nervous system, inactivation of just 4 inhibitory neurons caused “voracious overconsumption” of all foods.

The four inhibitory neurons Pool found in the fly brain, descending suboesophageal (DSOG1) neurons, send out a constant signal that inhibits eating. There are two basic types of neurons, excitatory and inhibitory. When inhibitory neurons are active, they inhibit any neuron they connect to. DSOG1 neurons indirectly inhibit motor neurons that control eating behaviors, including extension of their mouthparts, the proboscis, and ingestion of food. In normal flies, DSOG1 neurons are constantly active, providing chronic inhibition of eating. It is only when this constant inhibitory output is overwhelmed by a large excitatory feeding signal that eating begins. In the insatiable mutants, where DSOG1 neurons are inactivated, the animal will overeat any food made available to them. This includes the synthetic chemical denatonium, recognized as the most bitter substance in existence.

Discovering the importance of DSOG1 neurons in eating behaviors was an impressive feat requiring the advantages of fruit fly genetics. Fruit flies have a short life cycle and produce many offspring. In addition, genetic tools have been created that allow scientists to increase or decrease the amount of a specific protein in specific cells. For this study, transgenic flies were created where a gene that silences neuronal activity was highly expressed in a small subset of neurons, effectively inactivating them. 364 different transgenic flies were created that each inactivated a different small subset of neurons.

The transgenic flies were put through a behavioral screen to find flies that would consume water long after they were full. Normal flies will drink water for less than 10 seconds when they are already full. Another author on the paper, Samantha Cheung, and Pool hand fed the 364 transgenic flies in order to find 6 that would drink water long past satiation, for 1 minute or more. Out of the 6 insatiable transgenic flies, 1 inactivated a small subset of 32 neurons in the brain. Pool used additional genetic tools to inactivate smaller subsets of these neurons until he found the four neurons responsible for overeating, DSOG1 neurons.

Pool said that more research needs to be done to see whether a similar mechanism controls feeding in mammals and whether the findings are relevant to human problems, such as the obesity epidemic. A first step will be to look for a similar set of inhibitory neurons in the mammalian brain. The activity of DSOG1 neurons sets a threshold for what signals trigger eating. If we find similar neurons in mammals, it will be interesting to see whether their activity level varies across individuals or conditions. In humans, eating can be triggered by subtle physiological states, such as desire for pleasure, depression, or boredom. This research provides insight into the basic organization of circuitry that controls eating behaviors and may pave the way for understanding how appetite is regulated in emotional creatures like us.

Feed insatiable flies and discuss why we create mutants for science at Helix, the Exploratorium’s community science center in Los Altos, on Friday, July 18th, from 6-8 pm. This is part of the Bay Area Art & Science Interdisciplinary Collaborative Sessions event series on Monsters. Details available here.