Kids are the reviewers at this scientific journal

When Robert Knight made the half-joking comment at a meeting of scientists: “This whole scientific review process, it gets crazy. Why don’t we just put kids in charge?” he didn’t realize he was planting the seeds for Frontiers for Young Minds — a journal with articles written by scientists and reviewed by kids. 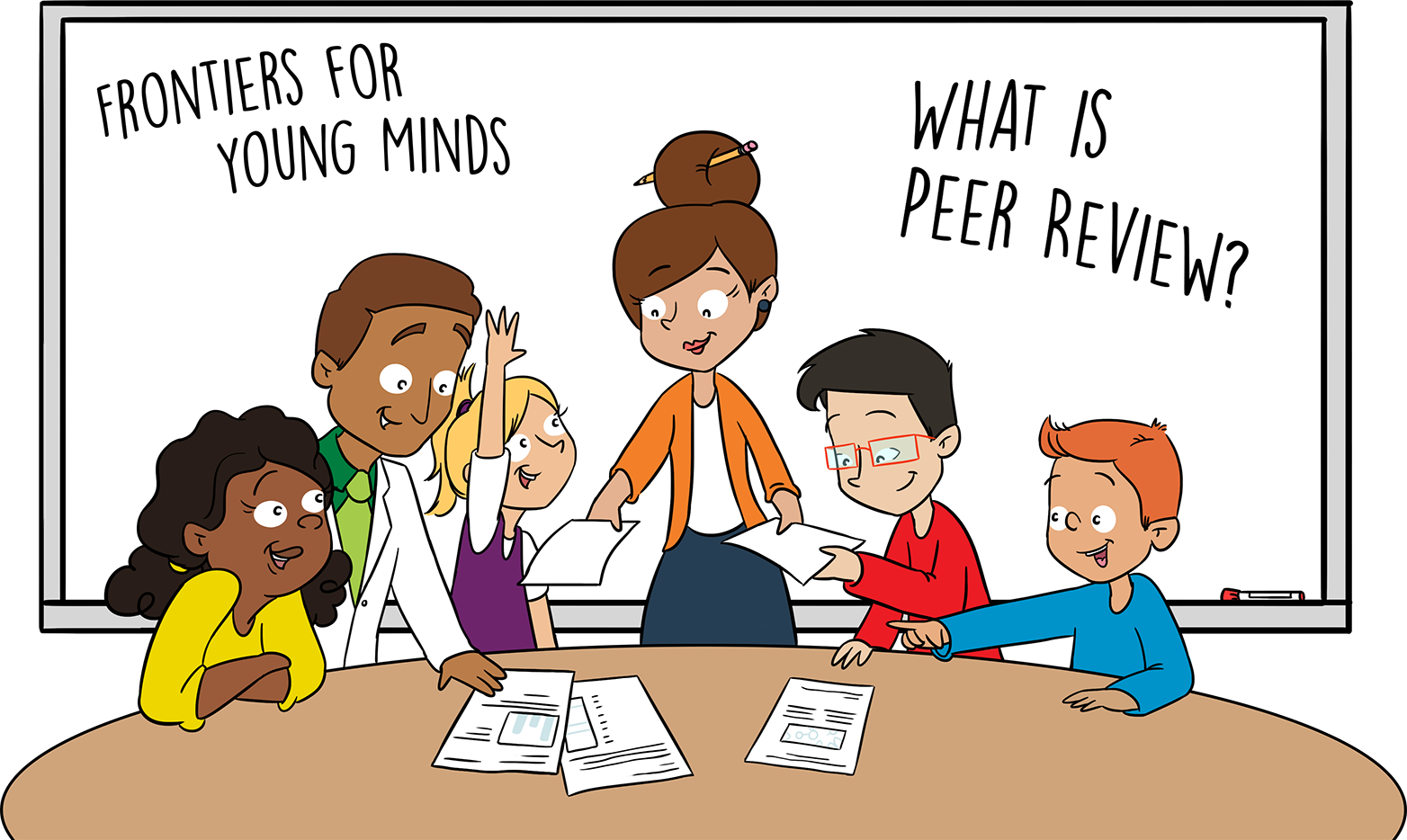 Illustration from Frontiers for Young Minds.

Knight is a Professor of Psychology at UC Berkeley and a member and former director of the Helen Wills Neuroscience Institute (HWNI). After he made the off-hand comment, he realized it had real potential. He recalls thinking: “You know, you could get pretty unvarnished opinions from kids. And they could actually learn the scientific method at a young age” by reviewing scientific articles aimed at their age group.

Knight decided to try to bring the kids’ journal to life by finding a scientific journal to publish it, but soundly rejected any that wanted to charge for it.

“We can’t monetize it, because if you monetize it, it means rich kids will have access and poor kids won’t. It has to be something for the public good,” he says.

He eventually found a home for the kids’ journal with Frontiers, an open access publisher that currently has over 60 journals. When they were just starting, they asked Knight to be the editor of their first journal, Frontiers in Human Neuroscience. He agreed to do it, but only if they would publish his journal for kids once the adult journal was up and running. They agreed, and Frontiers for Young Minds was born in 2014, with Knight serving as the field chief editor.

“It’s completely free. There’s no publication costs, there’s no submission costs — that has been funded by Frontiers. So, I really have to give them kudos for that,” Knight says.

Given Knight’s area of expertise, Frontiers for Young Minds was initially focused on neuroscience. He began by assembling a board of editors from scientists he knew.

“I basically called about 50 of my friends who were in neuroscience and I told them that if they like kids, they need to be on my editorial board,” he says, laughing. It worked, and around 40 of them signed on as editors. Current associate editors include HWNI faculty members Silvia Bunge, Jose Carmena, and Rich Ivry.

Article submissions originate from recently published scientific papers that the authors rewrite to be understandable to kids. These articles are then reviewed by an individual kid, a group of kids, or a classroom of kids (generally 8-15 years old) under the guidance of a mentor, who is often a graduate student or postdoc, but can also be a faculty member. HWNI faculty members Daniela Kaufer, Stanley Klein, and Marla Feller are all current mentors. The kids ultimately call the shots and can insist on revisions, accept, or even reject a paper.

“It’s quality science, cutting-edge science, being rewritten to target kids. Then the kids review it and make it even better with input from their mentors,” Knight says. The resulting articles, now numbering over 330, are available for free on the Frontiers for Young Minds website and can be used by teachers, parents, and kids worldwide. 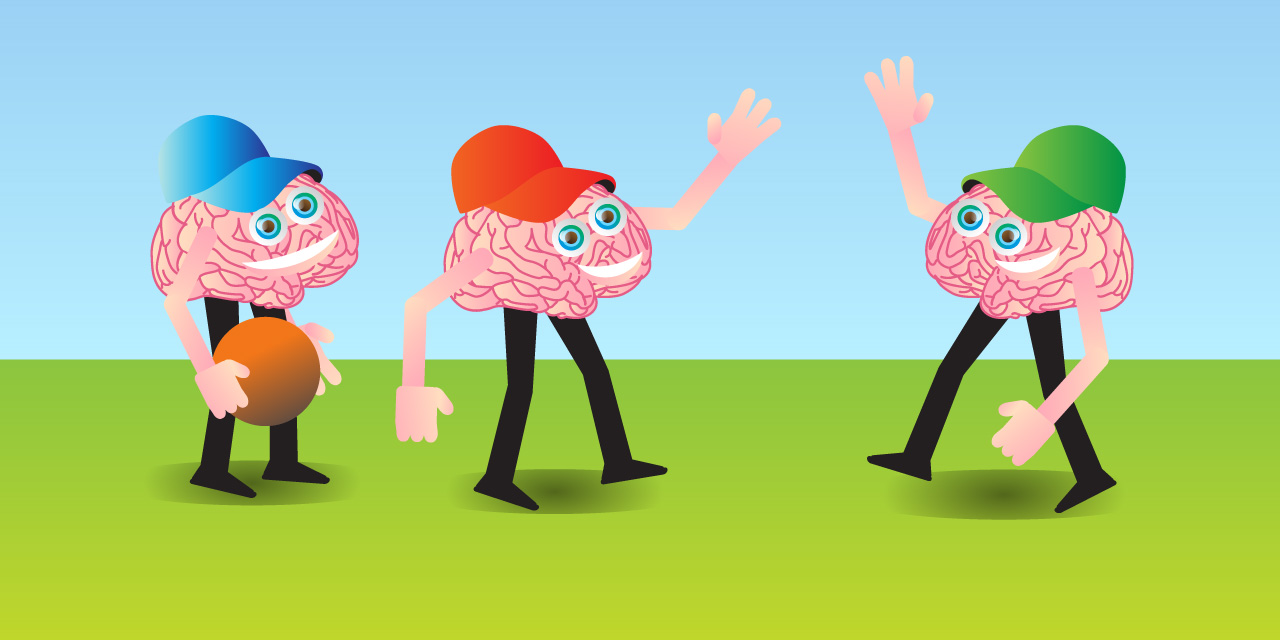 From the Frontiers for Young Minds article “Our Brain Enjoys Making Friends”.

The topics are chosen to be interesting to kids. Knight says some of the most viewed articles are about understanding others, empathy, bullying, and the related brain biology involved. The journal is also developing special collections on topics of particular interest, such as traumatic brain injury and psychiatric disorders, like depression and anxiety, in children. In addition to neuroscience, the journal has now grown to include the topics of astronomy and space science, Earth and its resources, biodiversity, health, and mathematics.

Besides learning about the topics covered in the articles, the review process helps kids understand the process of science, as the mentors guide them through assessing why the scientists asked the questions they did, how they tested their hypotheses, the conclusions that they drew, and how they communicated their findings.

“The goal is for the kids to learn the scientific method and feel really in control. It seems to work. The kids like it and I think they’re empowered,” Knight says. He is also often amused by how blunt the kids are.

“My favorite so far is an 11 year old who said: ‘This paper is written in such a boring way that I couldn’t get through the first paragraph. If the scientists want people to pay attention to their work, they probably should make it a little bit more exciting.’ You’d never get that from an adult reviewer,” he says, laughing. 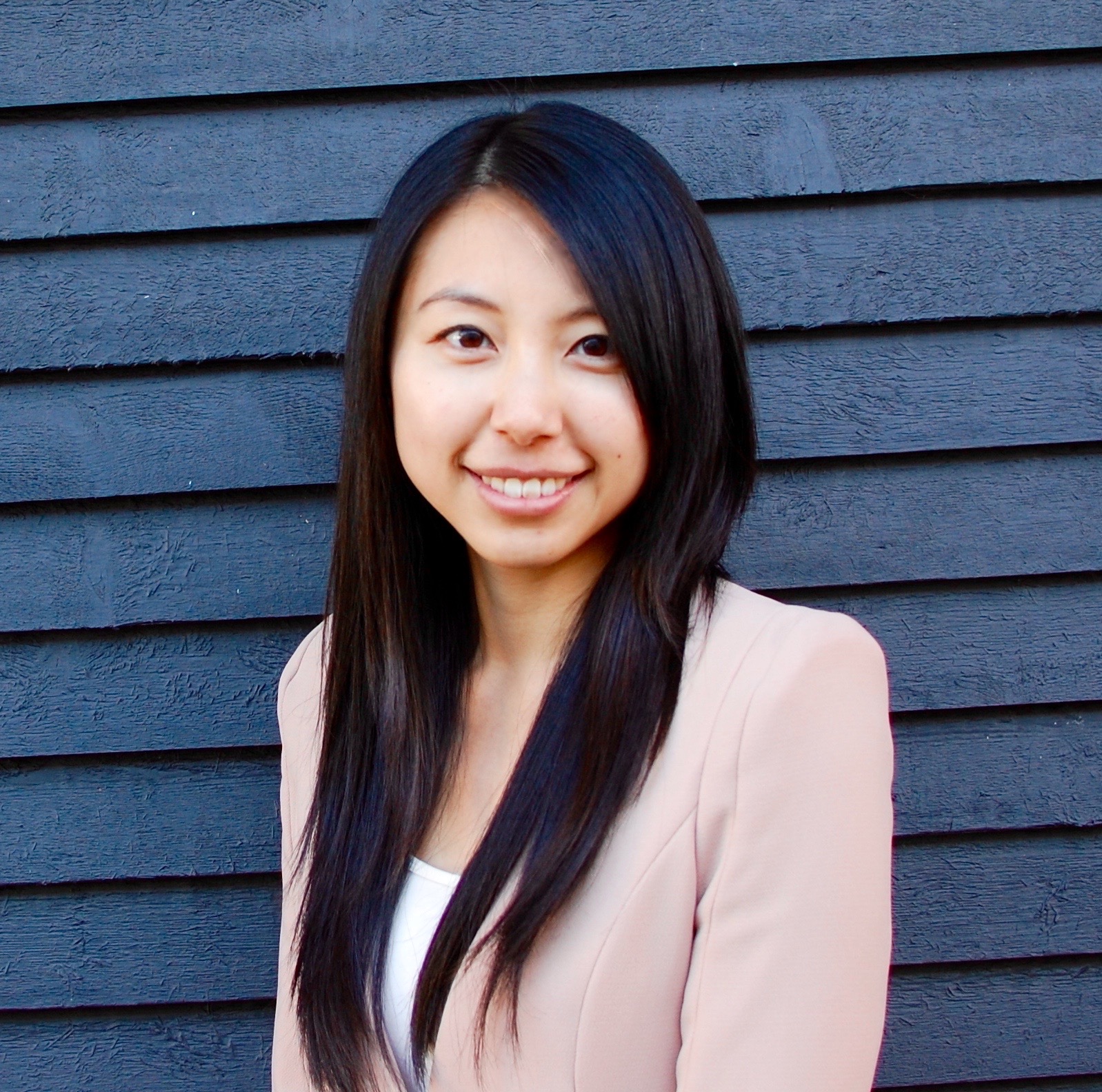 Julia Kam, a postdoc in Knight’s lab who has served as both a mentor and author for the journal, also finds the kids’ honest opinions refreshing. She says one comment that particularly stuck with her was: “Why did they do this research? Why would they spend time and money doing research like this?”

“These questions remind us to always highlight the importance of your research when you write papers…especially for kids, but also for fellow scientists in our own journals,” Kam says.

The review process occurs in a number of different settings: online, in classrooms, and at special “live review” events where scientists present a paper and then are questioned by a panel of kids in front of a live audience. Emilio Soto Soto, a Neuroscience PhD student in Lance Kriegsfeld’s lab, participated in some of the early classroom review pilots as well as a live review held at Chabot Space & Science Center in Oakland. 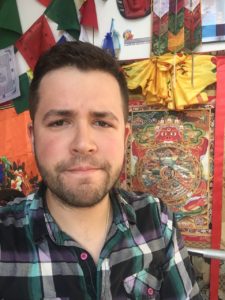 Soto says that mentoring a review with kids is “about making them feel comfortable that there’s no stupid question, and making it very clear that at times — especially in science — when someone doesn’t understand what they’re reading, it’s not about them being wrong or stupid. Many times, there’s just really jargony or confusing writing…It has very little to do with your own capacity to do science. It’s more about the language you use in science and the inaccessibility to it to many populations based on how it’s written and communicated, which is what the journal tries to address.”

The live review events further empower kids by putting them in the driver’s seat as they publically question scientists about their work, which can make even highly accomplished and experienced researchers nervous. Knight recalls a time when a member of the prestigious National Academy of Sciences presented his work at a live review at UC Irvine to ten kids.

“He said it was the most nervous he’s ever been…They accepted his paper without revisions and he was ecstatic!” Knight says, laughing.

In addition to providing unique educational opportunities for kids, volunteering with the journal also helps graduate students and postdocs gain experience and build career skills. Knight points out that a publication in Frontiers for Young Minds can be added to a researcher’s list of publications, and mentoring provides an opportunity for science outreach, which is important to many young researchers and also a necessary component of many grants.

Kam, who will be starting a faculty position at the University of Calgary in early 2020, says that being a review mentor has helped her gain teaching and science communication skills that she will use as a faculty member. 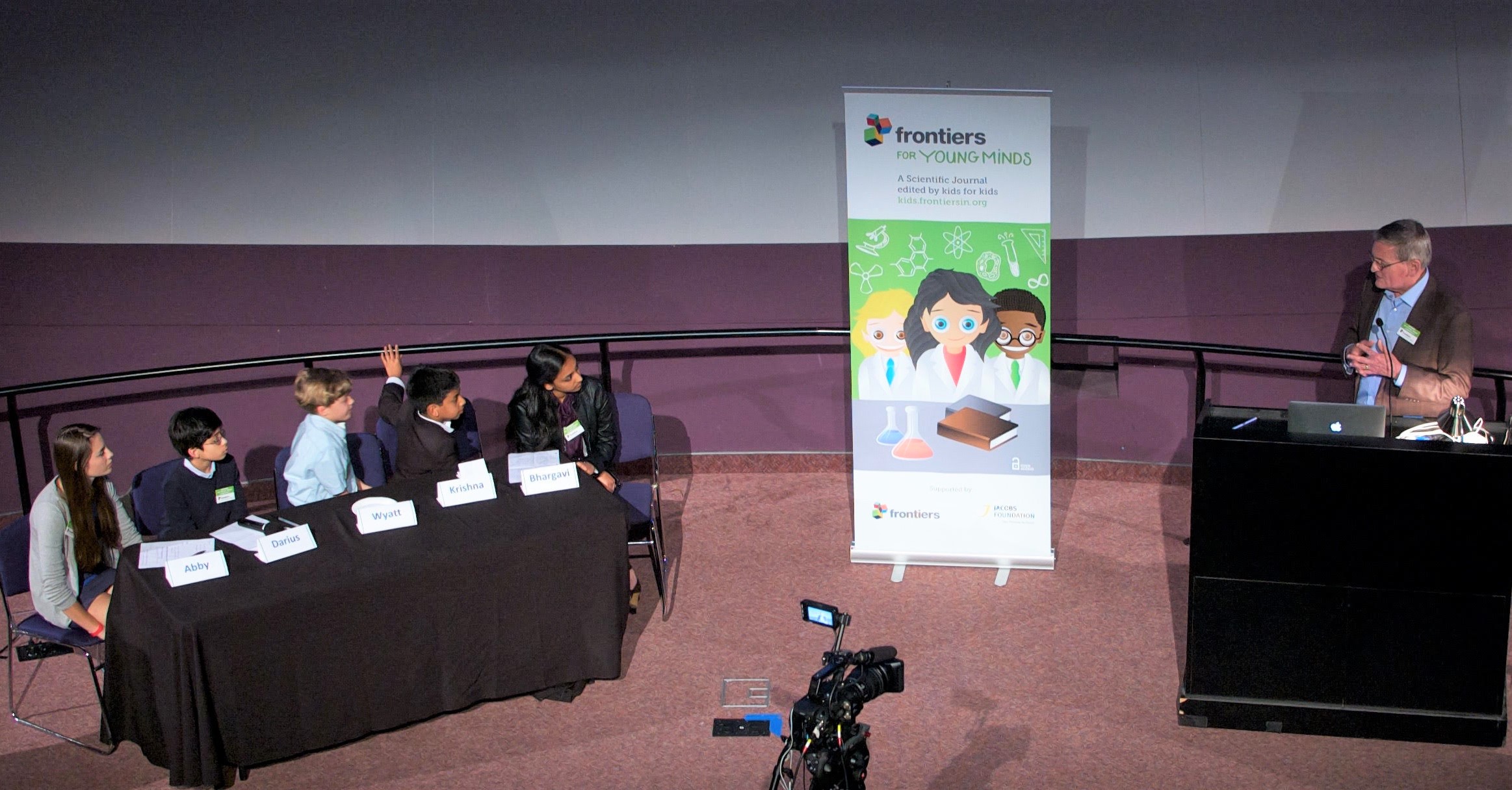 Knight with a panel of kid reviewers at a live review at Chabot Space & Science Center. Photo by Julia Kam.

“Because the scientific process is so new to [the kids], at least the peer-review process, when we introduced it to them it was very tempting to just give them all the answers. But then at the same time, you realize that if you provide the scaffolding and ask them a lot of questions, they’re able to bring more to the table than maybe what I and other scientists have been able to come up with as potential criticisms of the paper. So, the scaffolding process was a really great learning experience for me,” she says.

Kam says that the classroom experience she gained working with middle school students also applies to teaching and mentoring undergraduate and graduate students.

“You have to be prepared for class, able to communicate at an appropriate level for them, and to show your interest and knowledge, but in a way that opens up their interest and curiosity as opposed to just shutting them down. Also, presenting information clearly and stimulating their independent ideas…Especially within that short time, the most challenging thing was probably to develop the trust in them to share their opinions.” Kam learned to use strategies like icebreakers to cultivate that trust and encourage quieter students to share their thoughts.

Kam and Knight both point out that another valuable aspect of the journal is that the published articles explain scientific concepts clearly to the general public because they have gone through the rigors of kid-review.

“These are not dumbed-down articles, they are understandable articles,” Knight says. “Which means they are not just good for kids, they are good for the general populace.”

Kam says: “It’s important for scientists to communicate our work to the public. With the help of these young reviewers, this journal offers a great way to bridge that gap between science and society.”

Frontiers for Young Minds is indeed reaching a large audience, with close to 2 million views. Thanks to a donor, there is a full version of the site in Hebrew, and Knight says they are beginning to translate articles into Spanish and Chinese. Translating all the articles into multiple languages is one of Knight’s major goals, so they can be read by even more students around the world. He also hopes that more teachers will take advantage of the free articles and incorporate them into their lesson plans.

Knight would also like to branch out into video by having authors create 2-3 minute YouTube videos where they talk about their research and why they like science. He says that the first-author graduate students and postdocs featured would make ideal role models for kids because “it’s better than having some grey haired dude like me!” 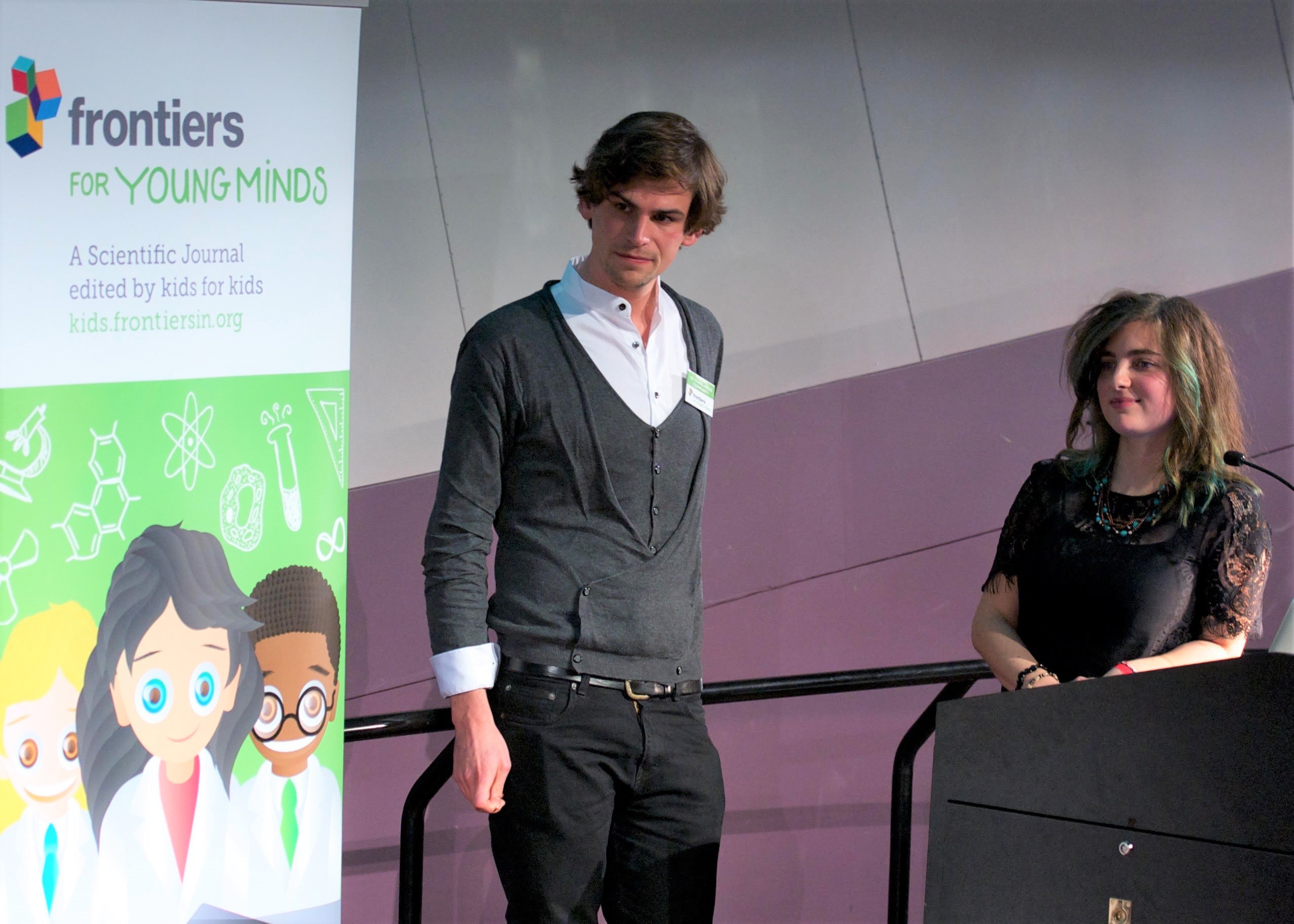 Numerous HWNI graduate students, postdocs, and faculty have participated in Frontiers for Young Minds as authors, mentors, editors, or live review presenters. Knight says that more volunteers and authors are always needed, so he encourages interested scientists to visit the website to see how they can get involved. Teachers, parents, and kids can also visit the website to see how kids can become reviewers or just to read the articles.

Kam says that one of the things she likes most about volunteering with Frontiers for Young Minds is that the kids “are not bounded by what we [as scientists] have been taught in the past 10-15 years of doing research. They bring much more creative suggestions to the table. That part’s been really inspiring and it’s just fun to be able to witness that firsthand.”