Light-activated antagonists for the GABA A receptor family

A comprehensive toolkit to advance the study of inhibition on the cellular, circuit, and organismal level

The precise excitatory signaling of the nervous system would be impossible without inhibition. Inhibition returns neurons to their baseline state, so that a subsequent excitatory signal can rise above the noise. Without inhibition, there is only noise. Noisy, hyperexcited neurons disrupt our sensory inputs, motor control, and cognitive abilities, resulting in debilitating pathological conditions.

GABA is the major inhibitory neurotransmitter of the brain. It exerts its effects by binding to GABA receptors that are expressed in the membrane of neurons. Once bound by GABA, fast acting GABAA receptors open and let negatively charged chloride ions flow in, inhibiting neurons. Considering the fundamental importance of inhibition in the nervous system, it is no surprise that researchers are interested in understanding exactly how GABA receptors work. 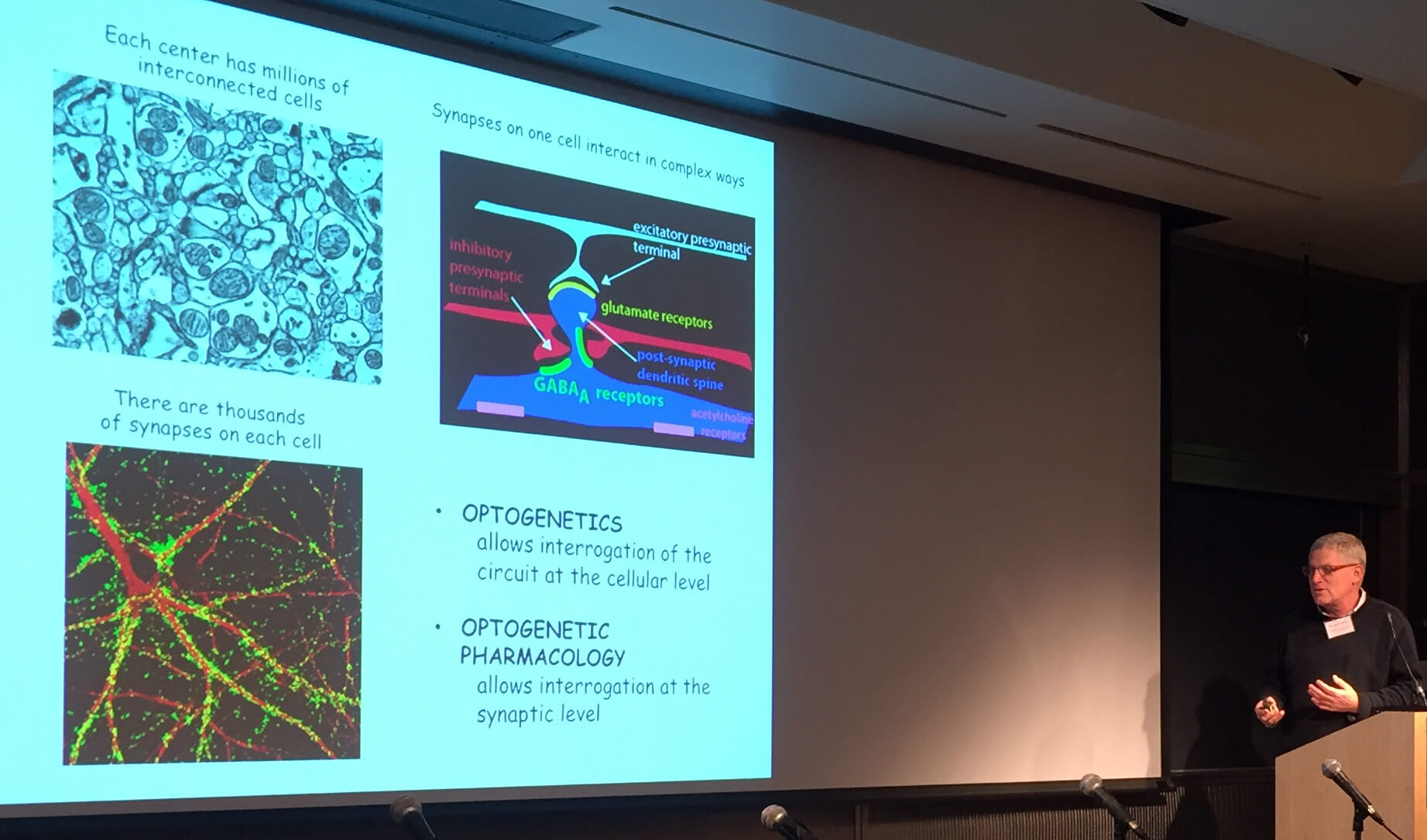 Richard Kramer, a member of the Helen Wills Neuroscience Institute at UC Berkeley, has a long and fruitful history of developing photochemical tools for precise control of neural activity. In recent years he has focused his efforts on controlling GABA receptors. A collaborative effort between members of the Kramer and Adesnik labs has yielded an extraordinary gift to neuroscientists. Not only have they produced a genetically-targeted photochemical toolkit to control every GABAA receptor subtype, they have proven the effectiveness of their toolkit in many common preparations, including in slices of brain tissue and even in vivo. These accomplishments were described in a paper published recently in Neuron.

Step one of this ambitious undertaking was the creation of matched sets of photoswitch ligands and photoswitch-ready mutant receptors for each of the six different GABAA receptor subunits. Co-first author Ming-Chi Tsai describes this feat, work that was done by fellow first author Wan-Chen Lin, as hugely impressive. “This is something I want to say is not trivial,” said Tsai. “It was a lot a lot of work.”

Lin and Tsai et al. developed an ingenious approach to block GABAA receptors with greater specificity and precision than was previously possible, a much needed advance for the study of GABAA receptor function. First, they created a set of photoswitch ligands that can be infused into brain tissue. This is a small molecule with three parts – a maleimide group that readily links up with the amino acid cysteine, an azobenzene group that changes conformation when exposed to a specific wavelength of light, and a ligand that acts as an antagonist when it binds GABAA receptors. Next, they genetically modified each of the six GABAA receptor alpha subunits to incorporate a cysteine near the GABA-binding site. Modified GABAA receptors can be introduced to cultured neurons, brain slices, or in vivo preparations through viral expression or genetic knockin.

Once the photoswitch ligand is joined to the modified GABAA receptor cysteine, it acts as a light-controlled antagonist. Triggering the switch with 500 nm light brings the GABAA receptor ligand into close contact with the GABA binding site, where it acts as an antagonist until the light is changed to a wavelength of 380 nm.

Importantly, Lin and Tsai et al. validated the use of their toolkit in a variety of preparations. They found that their system successfully blocked GABAA receptors at all scales tested, from individual neurons to in vivo studies.

“We wanted people to see the potential of this tool. A physiologist’s point of view is, ‘Yeah, I want to know if it works in a slice. And if you are to take advantage of light, then why don’t you just show that you can use it in vivo.’ We have characterized the system in in vivo contexts, and that helps people to know that it’s really working.” 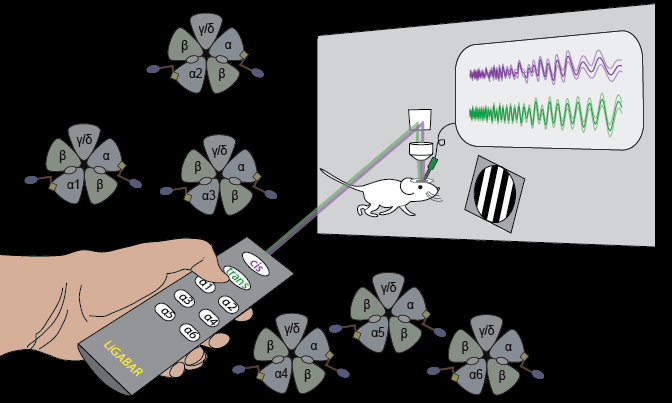 In one set of studies, Lin and Tsai et al. introduced the mutant GABAA receptor into the cortex with viral expression. Looking in vivo at responses to visual stimuli, they found that information processing was altered in the visual cortex when the GABAA receptor antagonist was activated with light. PV+ neurons, which usually exhibit sustained firing during visual stimulus of drifting gratings, changed their activity to burst firing when the 500 nm light was on.

In an additional set of studies, they generated knockin mice that carry the photoswitch-ready α1 GABAA receptor subunit. Again in vivo, they showed that neuronal activity in the visual cortex was altered in knockin mice during photo-controlled antagonism of α1-containing GABAA receptors. In this case, individual neurons had a heterogeneous response to antagonism, likely reflecting the heterogeneous expression of the α1 subunit.

Potential for wide use

The comprehensive GABAA receptor antagonist toolkit will enable researchers to answer some tough questions about the roles of GABAA receptors in brain development, function, and disease. The genetic component of this approach allows researchers to study the role of each GABAA receptor subtype, or to modify the existing tools to study GABA signaling in the neuron type of their choosing. The photo-control component greatly increases the speed with which receptors can be blocked and unblocked.

“I think that these light-sensitive GABAA receptors will be used widely,” Tsai said. He explained that interested researchers can be shipped the compounds, viruses, and knockin mice, along with detailed protocols for their use. “I see the potential for these tools to contribute to fundamental discoveries about inhibition in the nervous system.”

Read the associated article preview, “Neuronal Inhibition under the Spotlight,” by Martin Mortensen and Trevor G. Smart, also in Neuron.