Many people with neurodevelopmental disorders such as autism and tuberous sclerosis complex (TSC) exhibit cognitive inflexibility, and have difficulty modifying their thinking and behavior in response to changing circumstances. Instead, they may perseverate and continue to do things the same way over and over again. The cellular and molecular mechanisms of cognitive inflexibility have largely been a mystery, but a new study from Helen Bateup’s lab has revealed that dopamine plays an important role. Her group reduced cognitive flexibility in mice by deleting a gene from dopamine neurons that causes TSC when mutated, which lowered the amount of dopamine released. Notably, they were able to restore dopamine release and cognitive flexibility by manipulating a specific molecular pathway, opening the door to potential new treatments for patients.

TSC is a serious disorder, and patients commonly have a multitude of neurological problems, such as early-onset epilepsy and intellectual disability. But Bateup, who is an assistant professor of neurobiology and member of the Helen Wills Neuroscience Institute at UC Berkeley, notes that it was only in the last five years or so that the scientific community realized the extent that TSC is also associated with a variety of cognitive, psychiatric, and behavioral problems — collectively called TAND (TSC-Associated Neuropsychiatric Disorders). These include autism spectrum disorder (ASD) and attention deficit hyperactivity disorder (ADHD), both of which are also associated with cognitive inflexibility. Her team, led by postdoctoral fellow Polina Kosillo, wanted to understand the cellular and molecular mechanisms that lead to TAND in TSC patients.

“Nobody really knew why TAND happens, or which brain regions are responsible,” Bateup says. The researchers, who included collaborators at the University of Oxford, decided to investigate the role of dopamine neurons, since dopamine has been implicated in psychiatric conditions associated with TSC. In the study, which was published in Nature Communications, they used a conditional gene knockout approach to selectively delete the Tsc1 gene in dopamine neurons in mice. Mutations in TSC1 cause the TSC disorder in humans. Bateup explains that Tsc1 is active throughout the body and controls a variety of cellular functions, so this targeted approach allowed them to specifically hone in on its effects in dopamine neurons.

They found that dopamine neurons with the Tsc1 gene deleted (Tsc1 knockout; Tsc1 KO) were much bigger than normal dopamine neurons. Their cell bodies were up to three times larger, their dendrites were longer and greater in number, and their axon terminals were enlarged. But as Bateup says, “bigger isn’t necessarily better for neurons.” Indeed, they found that dopamine neurons projecting to a brain area called the dorsal striatum released 60% less dopamine than normal dopamine neurons, despite actually making more of the neurotransmitter. Bateup speculates that the abnormally large size of the neurons may have made them less efficient at actually releasing the dopamine they produce.

When they tested the behavior of the Tsc1 KO mice, they found no differences in motor function or social behavior compared to mice that were not genetically altered (wildtype; WT). To test cognitive flexibility, Bateup turned to fellow Helen Wills Neuroscience Institute member Linda Wilbrecht, who is an associate professor of psychology. Wilbrecht helped Bateup’s team set up a test for cognitive flexibility, called a four-choice odor-based reversal learning task.

“It’s a somewhat naturalistic test for mice, where they have to use odor cues to dig in pots of scented wood shavings to find a buried Cheerio or Fruit Loop reward,” Bateup says. There are four pots to choose from, each with shavings scented with a different odor, such as clove or eucalyptus. The food reward is hidden in only one of the pots, and the mice soon learn which odor leads to the tasty treat. Then the placement of the reward is changed, so that it is now in a pot with a different odor. The researchers can then assess how quickly the mice learn the new association, called reversal learning, which is a measure of cognitive flexibility. 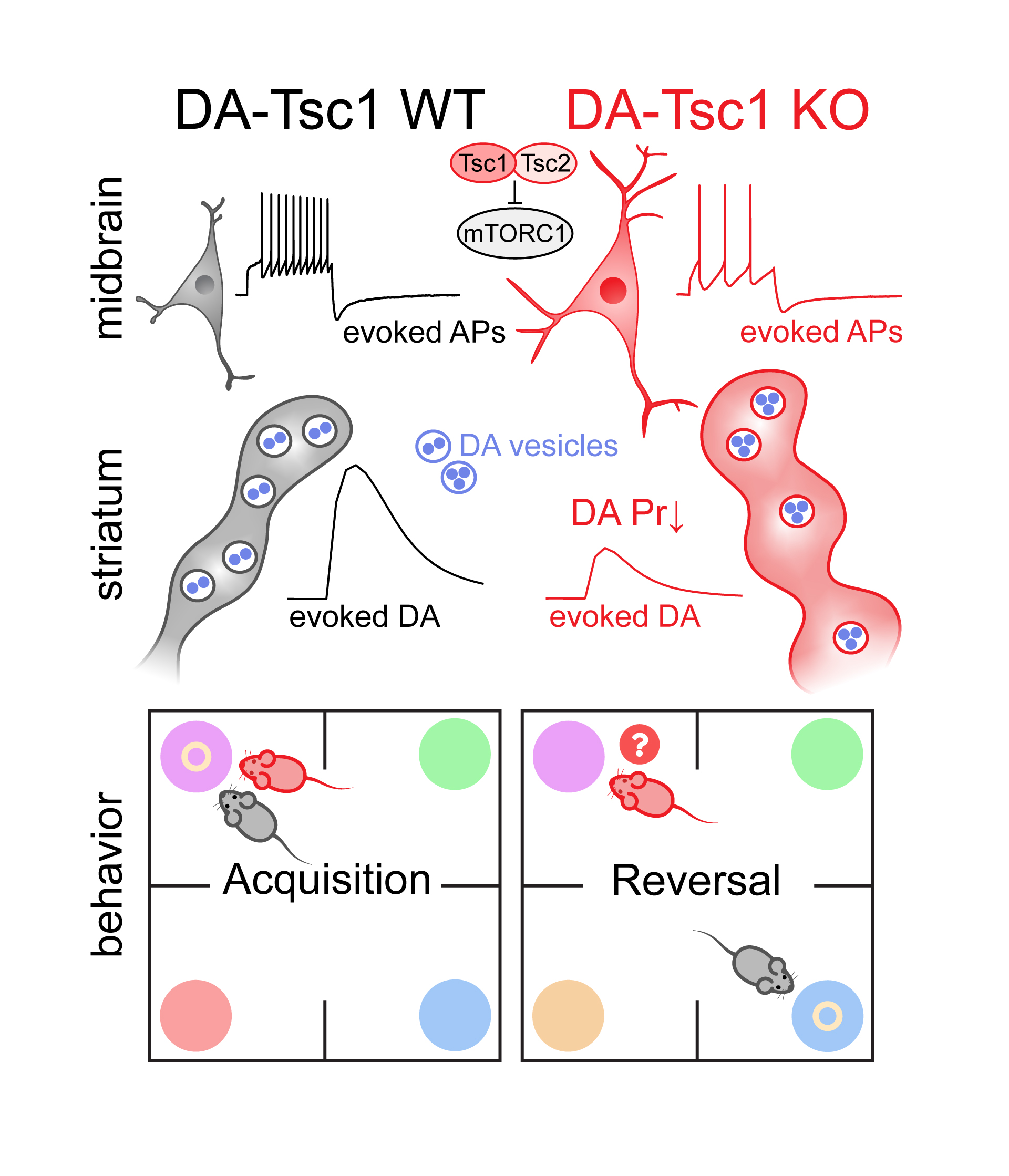 “They basically would just keep going back to this originally rewarded odor, even though there was no longer food in there,” Bateup says. “They were very slow in switching that strategy and exploring the other odors. So this is a classic perseveration phenotype. They just keep doing the same thing over and over, even though it’s no longer a successful strategy.”

The researchers wanted to know if they could reverse this cognitive inflexibility by altering a molecular signaling pathway controlled by Tsc1. Tsc1 encodes for a protein that inhibits the protein complex mTORC1, so when Tsc1 was deleted in these cells, the levels of mTORC1 became unusually high. Because mTORC1 signaling is involved in many cellular functions, this causes a host of problems for the cells — and for TSC patients.

They first attempted to lower mTORC1 with a drug called rapamycin, which is used for this purpose in TSC patients. “But we had a strange surprise that the drug didn’t seem to reduce mTORC1 in dopamine neurons,” Bateup says, adding that this unexpected finding warrants further investigation.

They then decided to try a genetic approach to specifically lower mTORC1 in Tsc1 KO dopamine neurons, by crossing the mice with a line where the gene for the protein Raptor  — a necessary component of mTORC1 — was deleted. They found that complete elimination of Raptor, and hence mTORC1, did not fix the cellular abnormalities and impaired dopamine release seen in these animals.

“So if you swing the pendulum all the way the other way, that’s just as bad for these cells. When we knock out Tsc1, these cells have too much mTORC1 activity. But if we completely suppress mTORC1 signaling, it doesn’t actually help, which is interesting,” Bateup says.

They then tried a middle-of-the road approach by creating mice that had one functional copy of the Raptor gene, and one deleted copy, effectively lowering the amount of mTORC1 without completely eliminating it. This made the dopamine neurons appear more normal, and increased dopamine release to roughly normal levels.

“Pretty remarkably, this was able to completely restore the behavioral deficits. So those mice no longer showed cognitive inflexibility or perseveration,” Bateup says. This indicates that there is likely an optimal level of mTORC1 for normal dopamine function and cognitive flexibility, and that clinical approaches that seek to drastically reduce mTORC1 in TSC patients may not be successful in treating these particular symptoms.

Bateup notes that cognitive inflexibility “is much more complex and nuanced, especially in humans. But our study shows that just reducing dopamine output in the dorsal striatum alone is sufficient to impair cognitive flexibility, or to induce perseveration. I think that’s helpful to know, because although there may be other brain regions affected in patients, restoring dopamine release could enhance cognitive flexibility.”

Her lab is now investigating possible genetic approaches to reduce mTORC1, and thereby increase dopamine release, as a treatment for patients with TSC. In addition to TSC, Bateup is also interested in exploring the role of dopamine and these signaling pathways in ADHD, ASD, and cognition in general, to gain insight into how these cells and molecules may contribute to complex human behaviors.