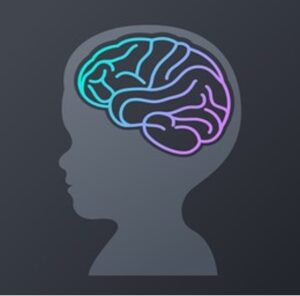 The outside of the human brain is highly folded, helping to pack billions of neurons and other cells into the relatively small space of our skulls. The folds are called sulci, and many of the larger ones are prominent and consistent enough to be used as anatomical landmarks, while others are so small and variable that they have been left out of brain atlases entirely. But a new study from UC Berkeley researchers suggests that some of these small, largely overlooked sulci may actually be important for understanding one of our most uniquely human characteristics — our capacity for complex thought — and how it develops in children and adolescents.

The study, published in Nature Communications, was the result of a collaboration between the labs of Helen Wills Neuroscience Institute (HWNI) members Kevin Weiner and Silvia Bunge, and was led by Psychology PhD student Willa Voorhies. Weiner is an assistant professor of psychology who studies neuroanatomy related to cognition, and Bunge is a professor of psychology who studies the neuroscience of cognitive development in children. For this study, they combined their respective expertise and discovered that the depth of some small sulci — called tertiary sulci — in the lateral prefrontal cortex of the brain is associated with reasoning ability in children and teens.

Reasoning ability develops as children grow into adults, and the brain also undergoes major changes during this time. Many of these changes occur in the prefrontal cortex of the brain, an area that is critical for high-level cognitive functions and is enlarged in humans compared to other species. But, how exactly the prefrontal cortex changes and how that might relate to cognitive development was not known. Voorhies says this is largely because the anatomy of the prefrontal cortex, and how it relates to specific functions, is still not well described.

“One influential neuroscientist who was trying to understand functional subdivisions in the prefrontal cortex likened it to a bowl of porridge,” Bunge adds. The researchers set out to both improve the map of the prefrontal cortex and investigate how changes in its structure throughout childhood could relate to the development of reasoning skills. 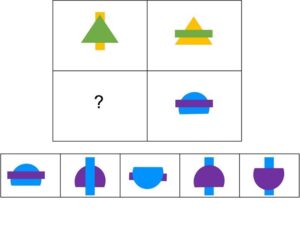 Relational reasoning problem similar to those used in the study. Study subjects were asked to choose an option from the bottom row that best completes the pattern (the fourth option). Problems used in the study were drawn from the Wechsler Intelligence Scale for Children-IV. Image from the Weiner and Bunge labs.

To do this, they scanned the brains of around 60 children and adolescents from the ages of 6 to 18 in an MRI machine to observe the structure of their prefrontal cortices. They also gave the children and teens a test of their relational reasoning ability. Relational reasoning is a complex cognitive skill that develops in different children at different ages, and involves extrapolating from the relationship between one set of objects or concepts to a different set. The test in the study used shapes, but Voorhies says that we use relational reasoning frequently, and in many different contexts “to navigate the world and to relate our experiences to somebody else’s experience.”

The MRI scans allowed the researchers to create a detailed map of the sulci in each child’s prefrontal cortex. They were interested in sulci because they can serve as anatomical landmarks and can have implications for brain function. Sulci are categorized as primary, secondary, or tertiary based on when they develop in utero, with tertiary sulci being the last to develop and consequently, the smallest. The team was particularly interested in tertiary sulci because they continue to develop throughout childhood, along with cognitive skills, and are present only in hominoids — humans and other great apes. But their small size and variability makes them difficult to identify. Voorhies says they wanted to investigate how tertiary sulci might relate to cognition “because they’re evolutionarily new, and they’ve been ignored.”

To identify tertiary sulci on the MRI scans, the researchers had to painstakingly trace roughly 1400 of them manually, since they are not automatically detected by current software. Once they identified the primary, secondary, and tertiary sulci in each child’s prefrontal cortex, they measured the depth of these sulci, as depth is the main feature discriminating sulcal types from one another. After randomly splitting the children into two groups, the researchers used a feature selection algorithm on the data from one group to objectively determine which sulci, if any, related to performance on the reasoning test. 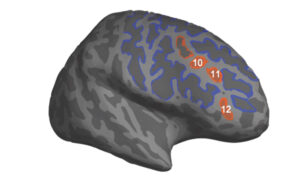 The three tertiary sulci found to be associated with reasoning performance (labeled 10, 11, and 12), shown on a model of an example brain. From Voorhies et al., Nature Communications, 2021.

“Consistently, in both of our samples, the depth of these three sulci was related to kids’ performance on this task, suggesting that we might be tracking some development in the brain that’s corresponding to the acquisition of these skills,” Voorhies says.

But how would deeper folds in the brain relate to greater reasoning ability? Voorhies says there is evidence from other studies that short-range white matter fibers (parts of neurons that transmit information) emerge from the bottom of sulci. The Berkeley researchers hypothesize that the deepening of tertiary sulci may reflect shorter connections between brain regions, resulting in faster neural signaling and ultimately improved reasoning ability. “That’s the working hypothesis, but we have to test it,” Voorhies says.

She also points out that because reasoning is a highly complex skill and the brain is extensively interconnected, it is critical to study other sulci and other areas of the brain to get a more comprehensive understanding of reasoning ability and how it develops. But importantly, this study provides evidence that tertiary sulci in the prefrontal cortex are related to cognition — a hypothesis first proposed over 50 years ago. Voorhies credits the unique combination of the expertise of her advisors, Weiner and Bunge, in helping them finally address this long-standing open question. 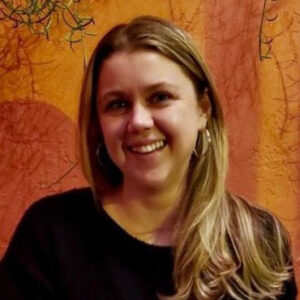 “[As a developmental cognitive neuroscientist, Bunge] thought that these were interesting questions to ask and had a theoretical background for it. [Weiner] has this really strong historical and anatomical knowledge, and also the skillset to actually identify these [sulcal] labels, because when only a handful of neuroanatomy labs around the world have identified them before, you need an anatomist to be able to verify them,” Voorhies says. “We had a combination of two very different labs that had different skills that complemented each other well for this question.”

This study is the first to map tertiary sulci in the prefrontal cortex of children, making it a valuable resource for future studies of human cognition and how it develops. The team has made their atlas of sulci publicly available so that other scientists can use it to inform their work. They are also collaborating with researchers at Vanderbilt University to train neural networks to automatically identify tertiary sulci, to minimize the need for laborious manual tracing.

“The goal is to develop novel, data-driven approaches to define sulci automatically,” Voorhies says. “Then, brain mappers with all kinds of interests in structure-function relations can automatically generate labels for [the brains in their studies], and then ask questions that really interest them.”

According to Weiner, there are roughly 75 tertiary sulci (and maybe more) in each hemisphere of the brain, so this study opens the door to discovering their potential relationships to cognition, and lays a foundation to guide future studies of cognitive development and neurodevelopmental disorders.

In addition to Voorhies, Weiner, and Bunge, other co-authors on the paper are Berkeley Neuroscience PhD student Jacob Miller and former undergraduate researcher Jewelia Yao. This research was supported by a T32 HWNI training grant and an NSF-GRFP fellowship (Voorhies), as well as start-up funds from UC Berkeley (Weiner). Funding for the original data collection and curation was provided by NINDS R01 NS057156 (Bunge, Ferrer) and NSF BCS1558585 (Bunge, Wendelken). Data analyses were supported by NICHD R21HD100858 (Weiner, Bunge).