By Natalie TerranovaNovember 9, 2018No Comments

In the mid-19th through the early-20th century, measuring postmortem brains to draw conclusions about their owners was in vogue. Neuroscientists collected and measured brains of “eminent” figures, criminals, and people of different races and sexes in an attempt to identify differences in neuroanatomy between these groups. Many claimed that the brains of people of color and women were smaller and less heavy than those of white males, but this work was unscientific and highly flawed since the brains were not measured in a blind manner—introducing researcher bias—and involved small sample sizes that could not take into account individual variation.

One of the few scientists to challenge these claims at the time was Burt Green Wilder (1841-1925), a naturalist and anatomist at Cornell. In a new publication in the Journal of the History of the Neurosciences, Assistant Professor of Psychology and Berkeley Neuroscience member Kevin Weiner reveals this little-known side of Wilder, as well as his contributions to neuroanatomical nomenclature and neuroscience education and outreach. 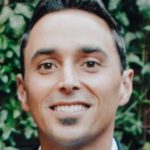 Weiner, an active neuroscientist who became interested in the history of his field through the influence of his mentor Charles Gross, says he was inspired to write the paper because: “A lot of Wilder’s contributions have been overlooked, which seemed like an injustice to me because Wilder was so passionate about preserving the truth. As such, I thought his history and contributions were worth my time to accurately preserve.”

Wilder is perhaps best known for his large collection of human brains. What is less known, as Weiner discovered, is that Wilder used this large collection to counter the claims of those who tried to use brain measurements as a justification for racial and sex discrimination. By having a large number of brains from people of different backgrounds, and by measuring them without knowing their identity, Wilder—and another anatomist, Franklin P. Mall—could not replicate the supposed differences in brain measurements between races and sexes, and found that individual brains had a high degree of variation, regardless of group. “Their ideas are consistent with modern approaches behind big data, blind analyses, and cross-validation. I think that was one of Wilder’s greatest contributions, because the previous approaches were so flawed, and he, along with Mall, were the few whistleblowers,” Weiner says. 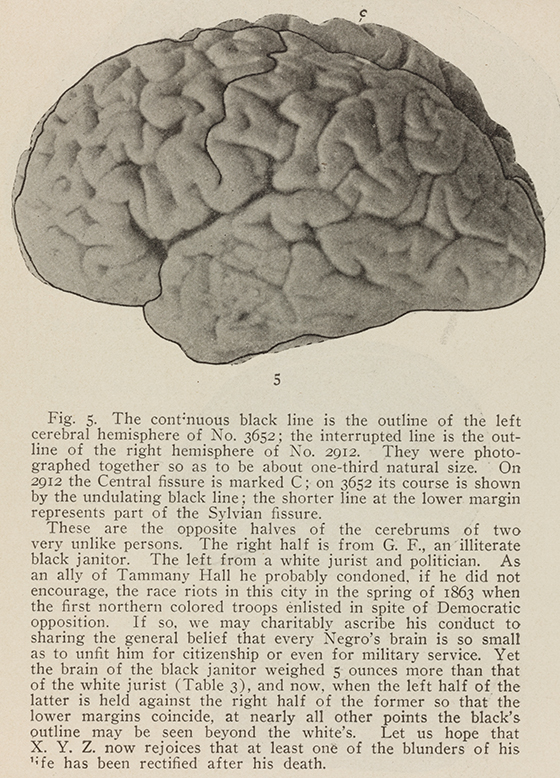 Figure from Weiner’s article, originally from Wilder’s “The brain of the American negro” (1909, Proceedings of the National Negro Conference), juxtaposing the larger brain of a black janitor against the smaller brain of a white jurist and politician, with original caption. Reprinted with permission of the Division of Rare and Manuscript Collections, Cornell University Library. ID Number: RMC2012_0011.

Wilder was outspoken in criticizing the work of those who claimed inaccurate race and sex differences in brain anatomy, both in scientific circles as well in the public sphere—speaking at the first conference of what would later become the NAACP, and publishing many articles in popular magazines and newspapers. Weiner says Wilder became a household name and one of the few scientists that actively “called out” high-profile writers and scientists for promoting these flawed theories. Weiner wanted to tell this part of Wilder’s story because: “It’s especially important right now. We’re at a time when brain measurements are front and center—during what some journalists have called a ‘golden age of neuroscience’—and given our present political climate, when discussions about race and gender are also front and center.”

Weiner stumbled upon Wilder’s story while researching the history of the structure and function of a brain area that his research focuses on—the fusiform gyrus—which is involved in face recognition. He found that Wilder “hated” the term fusiform, and other neuroanatomical nomenclature that identified areas based on their shape. Weiner says that Wilder’s biggest scientific contributions were in the movement to standardize neuroanatomical nomenclature. Although the complex naming system that Wilder developed ultimately did not win out in the nomenclature battles of the time, his push for a rigorous way to identify parts of the brain was a significant contribution to the field, and he published more than 35 articles and letters in Science alone.

Another of Wilder’s lesser-known contributions was as a strong advocate of neuroscience education and outreach. Weiner discovered that Wilder likely conducted the first “Brain Day,” in which scientists bring brains into classrooms to teach children, which he documented in a Science paper published in 1897. These “Brain Day” events still occur on a regular basis today. In the same paper, Wilder detailed the specifics of how to dissect sheep brains, variations of which are still used today in dissection labs in classrooms around the country. Wilder felt that all children should learn about the brain at an early age, and even proposed in 1911 that high school graduates should have as much knowledge about the brain as the average graduate from medical school. Weiner says that if nothing else, he hopes that Wilder’s 1897 paper will now be associated with the historical origins of “Brain Day” and sheep brain dissection labs.

Weiner is also hopeful that his paper has an impact beyond neuroscientists and specifically, motivates other young scientists to research and uncover unknown historical bits from their own fields. “I hope that some young scientist—or better yet, many young scientists—from a different field stumbles across this paper and gets inspired to go see who’s missing from the history of their own field. After all, not everything is digitized or on the Internet yet. Sometimes it’s still necessary to go the stacks in the library and get some paper cuts to uncover historical truths about your particular field.”