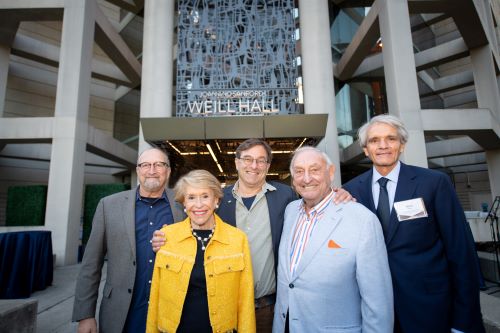 In recognition of the generous 2019 gift of $106M from Joan and Sandy Weill and the Weill Family Foundation to create the Weill Neurohub, the campus officially renamed the Life Sciences Addition building Joan & Sanford I. Weill Hall. Launched that same year, the Weill Neurohub seeks to accelerate the development of new treatments for diseases and disorders of the brain through interdisciplinary and cross-campus collaborations. A small portion of the gift was allocated to renovate the public areas of Weill Hall’s first and second floors to serve as the headquarters of the Weill Neurohub at UCB, called Weill Neurohub East, which is led by Helen Wills Neuroscience Institute director Udi Isacoff.

On October 3, 2022, Weill Hall and Weill Neurohub East were officially opened at a ribbon cutting ceremony. In their remarks at the event, Joan Weill noted her immense pride in learning of the early progress that Neurohub-funded projects are achieving across so many areas of mind and brain discovery, while Sandy reinforced his commitment to achieving breakthroughs in finally understanding and effectively improving outcomes for patients and families dealing with neurological and neuropsychiatric burdens.

We are tremendously grateful to Joan and Sanford Weill and the Weill Family Foundation for their generosity and vision in creating the Weill Neurohub, and are proud to house the updated Joan & Sanford I. Weill Hall on our campus.