Which way is up? Retinal neurons know, even when light deprivation during development distorts their shape

The visual system doesn’t develop in a vacuum. Exposure to visual stimuli at a young age physically shapes the neural circuits that allow the brain to identify objects, motion, and other features of the visual world. Because of this, lack of appropriate visual stimulation in newborn mammals can lead to lifelong visual deficits. However, a new study led by Berkeley Neuroscience PhD Program student Malak El-Quessny in the Feller lab, shows that mice raised in the dark have retinal neurons that still retain their normal function, despite dramatic alterations in their shape.

These neurons, called ventral-preferring directionally-selective ganglion cells, respond best to objects moving upwards in the visual scene. Their dendrites (the branching structures that receive information from other cells) are normally oriented in that same direction — a characteristic that was assumed to be important for their function. El-Quessny and her colleagues found that when they raised mice in the dark, these cells develop dendrites that are arrayed randomly around the cells instead. But surprisingly, this change in dendrite orientation did not affect the response properties of the neurons. They still responded most strongly to upward motion, indicating that the shape of these neurons doesn’t define how they actually function in the circuit. 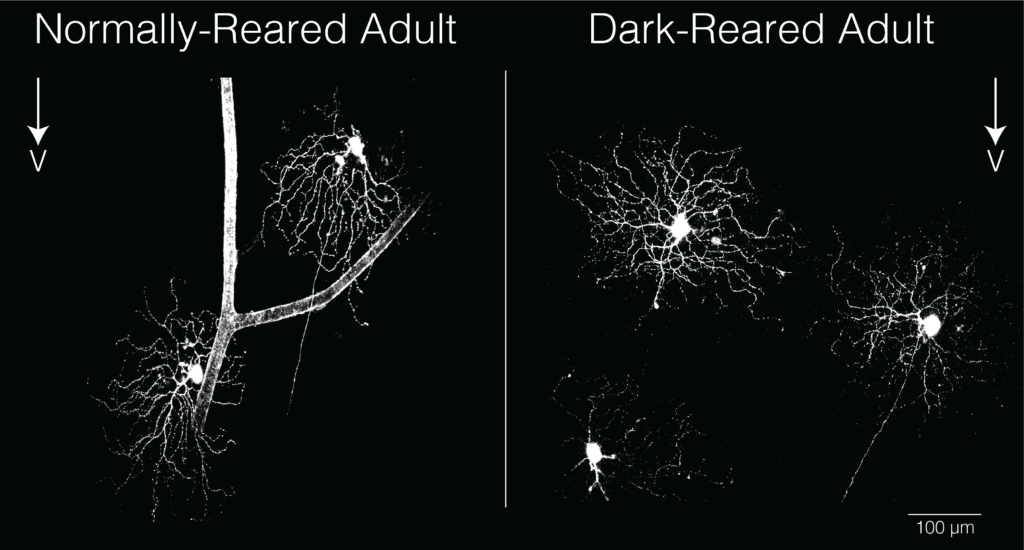 Ventral-preferring directionally-selective ganglion cells (vDSGCs) in animals reared normally have dendrites that also point ventrally (towards bottom of image). vDSGCs from animals reared in the dark have randomly oriented dendrites, but are still tuned to ventral motion. Image: Feller lab.

Read our Q&A with El-Quessny below to learn more about this unexpected finding and what it could mean for our understanding of neural development.

What motivated you to do this study?

Malak El-Quessny: I’m really interested in how the nervous system gets wired up during development. The mechanisms that underlie development are broken into two categories — those that depend on neural activity and those that are pre-programmed via genetic mechanisms. In the Feller lab we address this question in a classical circuit: the direction selectivity circuit of the retina. This circuit is dedicated to extracting the direction of object motion in visual space. In my study, we wanted to determine whether visual experience influences the development of the direction selectivity circuit — meaning does a cell need to be exposed to moving objects in order to develop its sensitivity for motion? Or is the circuit pre-programmed?

We focused on one particular direction-selective circuit: the one that responds to objects moving upward in visual space. Specifically, we focused on the output neuron of this circuit, the directionally selective ganglion cell (DSGC), which conveys the directional computation to the rest of the brain. This cell has asymmetric dendrites that point in its preferred direction — so the cell has both a shape and response property that normally line up together. When we compared animals raised in the dark with ones raised in normal light/dark cycles, we made a very surprising discovery. We found that the shape of the cell changed dramatically, where it kept its immature morphology of having its dendrites point in random directions. However, we found that, despite having its dendrites pointing the wrong directions, the cell is still sensitive to upward moving stimuli!

The shape of the dendrite of a neuron has long been thought to influence the neuron’s synaptic partners and integration properties. Manipulating the dendritic shape of cells, via dark rearing, enabled us to assess whether dendritic morphology dictates a neuron’s synaptic partners, which underlie its direction-selective computation and dendritic integration properties. 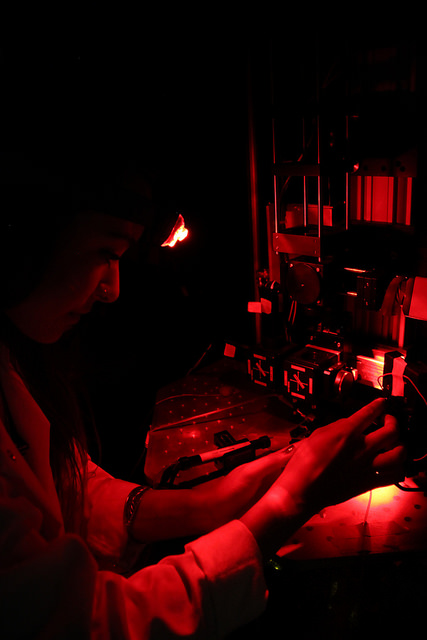 El-Quessny conducting an experiment while using a red headlamp, so as to not stimulate the mouse retina. Photo: Ray Cayetano.

What were your methods and main findings?

We use retinas from transgenic animals in which ventral (upward) motion-preferring direction selective ganglion cells (vDSGCs) express the fluorescent protein GFP. To target these cells for recording, we used a two-photon laser, which utilizes infrared light that doesn’t bleach photoreceptors. Once we find a cell, we use a pipette to record several properties: 1) the neuron’s output or spiking activity; 2) the excitatory and inhibitory synaptic inputs that the neuron receives. When we record the neuron’s responses to moving visual stimuli, we found that visual experience neither influences the vDSGCs spike output tuning or its inhibitory and excitatory synaptic input tuning. We also filled each cell with a fluorescent dye so that we could image the shape of the dendrites.

Our main finding is that, in the retinal direction-selective circuit, the shape of the dendrite does not seem to dictate the synaptic partners of the DSGC. So, despite disordered dendrites, the computation of direction selectivity remains intact.

What was the most surprising outcome of this study?

Evidence from several other parts of the brain — particularly in sensory cortical areas — indicate that sensory deprivation alters dendritic orientation, which had been interpreted to indicate that the neural circuit was not normal. Our study is the first to show that this altered morphology does not change who the neuron is wired to or how it performs its computation. The wiring scheme of the direction selective circuit is surprisingly robust to changes in activity during development.

How does this research add to our understanding of neuroscience, and why is that important?

Our results indicate that there is perhaps not a tight correlation between cellular structure and function, a concept we teach our undergraduates as a fundamental principle of neural circuits. Rather than structure predicting function (i.e. dendrites instructing wiring) our data indicates that function influences structure, where proper circuit function, through normal visual experience, influences dendrite orientation.

What questions did this study raise that you would like to see answered?

I’m curious to know the mechanism by which visual experience can instruct dendrites to orient in a particular direction: Does it influence synaptic transmission? If so, do synaptic contacts form, break and reform until dendrites are strengthened through Hebbian processes? Does the synchronous activation of similar cell types, in response to ventral motion lead to concerted synaptic formation for all ventral preferring direction selective ganglion cells? How do vDSGC presynaptic partners know to form synapses with this particular cell despite its dendrites not orienting in the predicted position? 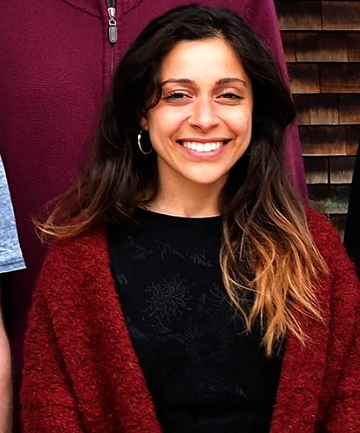 Is there anything else you’d like to add about this study?

I am also very proud that this study was done by a powerhouse of all-women neuroscientists!

What are you working on next?

I have designed experiments that will test a few hypotheses regarding what are the mechanisms that cause vision-dependent changes in the dendrites. I hope to start to figure it out before I graduate!