With the flip of a switch, scientists activate pathway impaired in Parkinson’s disease

In the new method, a protein M (gray vertical structure, left) embedded in the cell membrane anchors a light-sensitive molecule P (green line with circular ends), which then binds to and activates the D1 dopamine receptor (D1R) when exposed to blue light. Image from Donthamsetti, P. et al. (2021) Nat Commun.

Parkinson’s disease is caused by the degeneration of dopamine-producing neurons in a region of the brain that helps control body movements. As a result, patients with Parkinson’s have problems with movement that become worse over time as more of these neurons die off. The drug levodopa is currently the most effective treatment for Parkinson’s disease, but because it works by boosting dopamine production in existing neurons, its efficacy deteriorates as the disease progresses and more of these neurons are lost.

Scientists at the University of California, Berkeley are tackling this problem by turning their attention to the cells and receptors that receive the dopamine signal, since they remain intact in patients with Parkinson’s disease. In a paper published on August 6 in Nature Communications, they describe a new method that allows specific dopamine receptors, on specific cells, to be turned on and off like a switch, using different wavelengths of light. These cells and receptors are part of the brain circuitry that controls movement and is impaired in Parkinson’s disease. In mice, activation of the receptors increased movement — a finding that could lead to new treatments for Parkinson’s disease down the road.

The study was led by senior author Ehud Isacoff, professor of neurobiology and director of the Helen Wills Neuroscience Institute (HWNI), and first author Prashant Donthamsetti, a postdoctoral fellow in Isacoff’s lab. Their team engineered a molecule that activates specific dopamine receptors and can be controlled by light. This “photoswitchable” molecule (P) activates dopamine receptors when exposed to blue light, but shifts to a deactivated form when exposed to ultraviolet (UV) light.

To target the P molecule to the cells and receptors of interest, the scientists injected a modified virus into the brains of mice to deliver a gene that produces a protein (M) that sticks out of the cell membrane and acts as an anchor for the P molecule. This approach allowed them to express M in a specific group of cells (dorsal striatal medium spiny neurons) that express the D1 dopamine receptor and are involved in movement and Parkinson’s disease. When P is injected into the same brain region, it binds to the M protein on the surface of these cells. 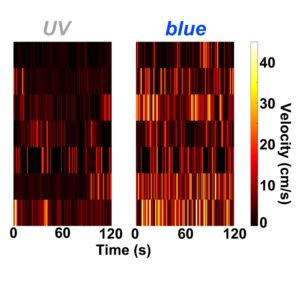 With P in the right place, the researchers then used optical fibers to shine blue light into the area, which caused P to bind to and activate nearby D1 dopamine receptors. Switching to UV light deactivated the receptors, giving the scientists the ability to turn them on and off at will. They found that activating these dopamine receptors caused the mice to increase initiation of movements. This is particularly intriguing because difficulty initiating movements — such as getting up from a chair — is a common symptom of Parkinson’s disease.

Because this technique is invasive and would require gene therapy to insert the gene for M, use in patients is a long way off. But in the short term, it provides a much-needed new tool to study Parkinson’s and other specific dopamine pathways in the brain. Dopamine is involved in a wide variety of functions including learning, reward, and appetite, and disorders that include addiction and schizophrenia. It is used by many different neurons throughout the brain and there are five different subtypes of dopamine receptors, including D1. These factors make it challenging to disentangle all the different dopamine pathways, but this new technique provides a way to selectively control specific dopamine receptors on specific cells, and could be adapted to work on other types of dopamine receptors in different brain regions — thereby illuminating their function.

In addition to dopamine, the authors write in the paper that this method could be used to investigate other neurotransmitter systems, and therefore has “the potential to be used as a general approach to crack neural circuits and their relationship to behavior.”

Co-authors on the paper include UC Berkeley associate professor of neurobiology and HWNI member Stephan Lammel, and other collaborators at UC Berkeley, Ludwig-Maximilians University (Germany), and New York University. This work was supported by the National Institutes of Health (DA044696, DA042889, R01NS108151, RF1MH123246), the McKnight Endowment for Neuroscience (048240), the European Research Council (268795), and the Weill Neurohub.